About a 15 minute jog west from the Rocklyn sign post will bring any interested person to an abandoned highway. The road will take you past where Sugar grew up to the ripe age of 18. Then she flew the coop to live with me. That abandoned strip of lumpy asphalt brings back many memories.

Just as the road makes a bend to the north, there sets an old empty gravel pit. On top of a bluff that overlooks this forsaken hole, stood a cherry tree that has died since a tragic event took place there. But its lateral roots now send up several bush-like trees.

A couple of decades ago, Sugar got to hankering for her old scab-rock and sagebrush scenery, so we started using this vacant road for our physical fitness program. One spring day we spotted a car parked by the bluff with the cherry tree on top. [We] soon recognized this tall, old timer as Roy Borck. He had just climbed down from inspecting the blossoms on this lonesome cherry tree. “I’m glad the frost didn’t damage the blossoms,” Roy stated, adding “The prospects for a few cherries looks good.”

Upon leaving Roy standing by his familiar old car, I told Sugar that when I was a kid, Roy would drive up to the Rocklyn store on Sunday afternoons in his version of a racing car. The bullet shaped hand made body was bolted on to a frame that held a model T motor. It was quite a show-off rig, and was looked over by everyone while waiting for the passenger train to pull in from Spokane. He built the cockpit just big enough to hold himself. But it was a thrill to see Roy go tearing down the road with a rooster tail of dust following behind him.

The next season, just by fate, we found Roy back again at the lone cherry tree. This time the blossoms had fallen to the ground, and the stems holding the cherry shaped buds were drying up. He had a pair of pruning shears in his hand, and was busy whacking off many branches. “It needs pruning to bring back life,” he said, “I hope next year to see blossoms making cherries that will set.”

We talked about the early days of the tractors. Roy used to encourage me by stating that tractors were here to stay, and I should not fall apart if a total breakdown occurred. He was my pacifier ’til tractors took over the farms. Roy was a much wanted combine separator man, and drew high wages when harvest time rolled around.

The third year we found evidence that Roy had been checking on his roadside cherry tree. Limbs were again shaped to give the tree grace. But the sickly look of that tree showed signs that its days were numbered.

That same year when the August heat was the hot-test and the wheat was about all shaved off, Roy became depressed. Upon finding a farewell note, Bill Livingston and George Borck got to the cherry tree on the bluff too late.

Roy loved to see things grow. During our 1931 dust bowl, he used to tell us that tender wheat plants needed large clods to protect them from the harsh winds. “A person can harrow spring seeded fields too much, and break up the needed protection,” he would say.

Bill and his dad had befriended Roy during his retirement years. Yet despondency had set in and taken its toll. 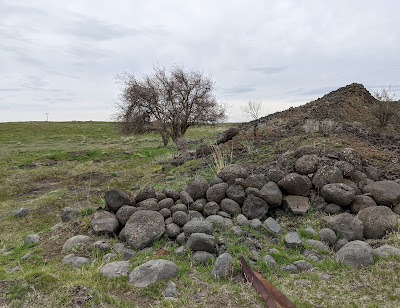 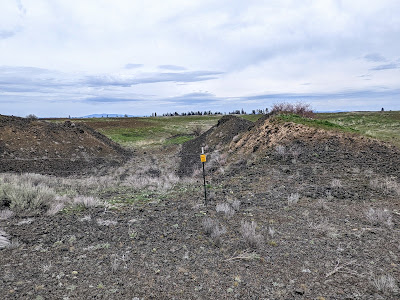 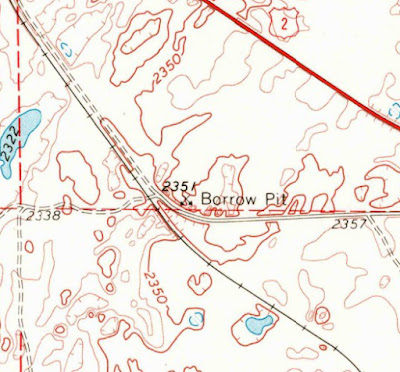 Borrow Pit: an excavated area where material has been dug for use as fill at another location /1969 USGS 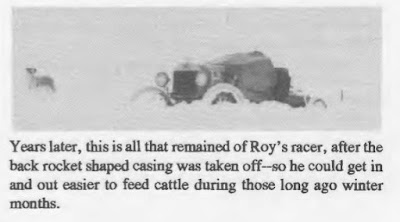 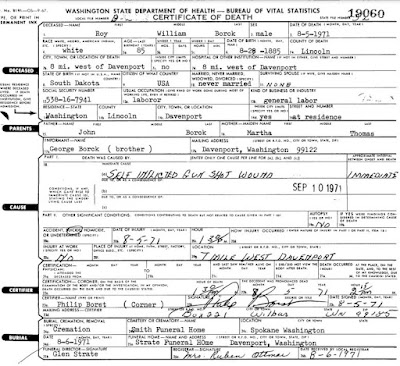 "...despondency had set in and taken its toll."