It’s always comforting to know that an active life can stretch your survival path, that is if something fatal does not get in your way.

The point was driven home when neighbor Maurie Fink came down last week and showed me a picture of an 86-year-old Davenport senior citizen digging a 15-foot-wide cave. It was deep enough for him to crawl in and get his handsaw busy to do some amputation on thick trunk-like roots. They were holding the largest standing, lone Douglas fir tree in the Rocklyn area. His four-score and six-year-old muscles caused this historical landmark to fall, and eventually disappear.

By counting the tree rings, this old guy was already half way through grade school when the established homesteader stuck that Douglas fir twig in the prairie sod.

Who is this non-arthritic fir tree executioner? His name is John Weiland and he came to Davenport in 1914 as a young man just turning 21; legally old enough to become a rounder, but chose not to. This was the beginning of about five more health rules he followed that boosted him toward his long and so far, healthy life.

He did, however, run some health risk by not getting married until he was 39 years old. Second, to keep himself in shape so that he could have a chance to become a century plant, he chose the laboring type of life; getting jobs helping farmers to get on their feet.

After nine years of soil tilling, John spent the next seven years as a mechanic. This kept him on his toes, and his mind active. Then the state highway department saw to it that he stayed in shape for 33 more years, plus a stint on the county roads.

Third, to make himself last longer, Mr. Weiland, 13 years ago at the age of 73, accepted a job on the Fink farm which was supposed to last only two weeks—tractor driving. But luck was with John, the Finks loved him. He was allowed to build all the fences out there in the big blue yonder, so the scads of cattle could be kept in carefully selected paradise spots. And of course, he took time out this spring to massacre that lonesome tree.

Fourth, regular feeding time for John keeps his intestinal time clock in perfect shape. Saturday, when I stopped at his place to see if I could tell my reasons for his successful stay on planet earth, I noticed it was 12 o’clock sharp. His wife Emma had the noon meal on the dining room table, including a healthy salad.

Fifth, a clear conscience. He believes in turning out a respectful amount of work. It makes Johnny boy sleep better, adding up to more health benefits. If it takes him seven hours to complete a job that he figures could have been done in five, then five is all he charges for.

Sixth, to eliminate stress, John decided years ago to buy a pickup truck that would last him the rest of his life. So, in 1935 he bought a new International pickup, and is still using it religiously to commute to the Fink farm. For 44 years now, there has been no worrying about trade-in deals and getting gypped.

Long ago, high-priced license tabs vanished. Since Weiland was never a hot-rodder, the multitude of thousands upon thousands of soft miles put on the rig was very kind to the original pistons that are still bouncing up and down when he starts it up to go to work.

His transportation still looks sharp! The stripped price in that ancient day was $651 delivered. But old John in his younger days, thought big. He wanted some factory goodies, so he ordered heavy-duty truck tires which had a $40 surcharge, and spent $5 for soundproofing, so he could hear the motor purr. He also wanted a foot-longer chassis, which set him back an extra $15. The total bill caused John to fork over $711. 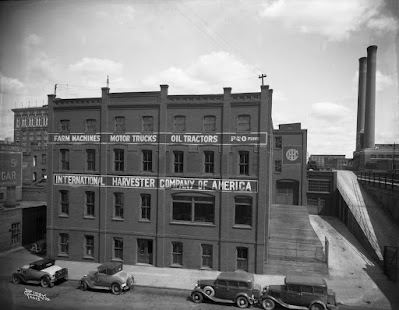 THEN & NOW: Google Street View, Spokane Washington
[Notice the remnant of the ramp leading up to the railroad tracks.] 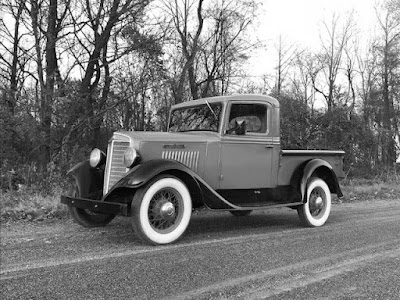