Nearly Had Our Brains Knocked Out

“How come you didn’t go to Hawaii this winter?” a friend asked me at a farm meeting the other day. “You’re retired now and got nothing to hold you back.” Probably so, but we are still in love with our environment. Three years ago, Sugar and I did go to Hawaii. As of today, we do not feel a Hawaiian recharge is necessary.

The fall we were there, our island hosts were my niece, Paulette, and her husband Peter. My first request was to see a real live-in grass hut, but found out you had to have reservations. Our schedule did not permit it, so settled for a photo of a native cutie emerging from a grass shack.

We did expect to see oodles of bicycles, small motorcycles and tiny Japanese cars. Instead, we mostly saw authority looking cars crowding the freeways that couldn’t go very far, as Oahu is only 40 miles long. There were plenty of natives trying to find their way through a maze of tourists that were taking pictures and buying lots of brightly colored stuff and things,

All in all, it’s a good semi-tropical island. If you can’t get out of Honolulu, find a box and place it in an opening between the high-rises and, with the added height, you can see the tall sharp green mountains. Soon you will realize it was at one time a beautiful place.

Peter is an excellent surfer, so we were first taken where the waves are quite hostile. After Sugar and I nearly had our brains knocked out, we learned to swim out beyond the breakers. Finally, we had to settle for beaches where the ocean wasn’t so wild. We swam everywhere we could find water, and the island seems to have plenty of that.

Sure felt at ease there, due to the free life-style. If you want to, you can go bare-footed anywhere. It’s a must to take your shoes off before entering anyone’s home. You could usually tell how many people were inside by counting the thongs that were scattered around the door, and dividing by two. A real good thing they have going there is the inter-mixture of races. It’s neat, as it eliminates the hostility we have on the mainland.

The four of us spent Thanksgiving Day with two fat ones, ten Japanese, seven natives, two guys built for fishing, and a dog. There was lots of native food to pick from, but it was buried in raw fish and seaweed. I found some Jell-O and a piece of turkey that Sugar roasted, so was able to survive.

We were glad that Peter and Paulette helped us take in the town on our final night on that over-loaded island. We found out a bit about night-life. After all, Sugar was entitled to a little taste of class. We really enjoyed the glitter and warm evening air at Waikiki that night. The things they wanted us to see were too late to meet reservation time, so we wound up in a classy spaghetti joint. Beings we didn’t order any booze, we had to live on bread and water for half an hour.

Finally, a plateful of something arrived. A small candle setting in a bowl on our table was about to go out, so couldn’t tell what it was. The taste was foreign, so I substituted some dried figs that I kept in my pockets for such emergencies. (My apologies to Peter and Paulette.)

We did find an opening where a Polynesian show was in process. Besides the tickets, you were forced to buy two drinks apiece. I didn’t think liquor and figs would mix very well, so ordered peppermint on ice, as it sounded like I’d been around. But had to save it till I could order 7-Up. Now I know why they don’t make peppermint 7-Up. 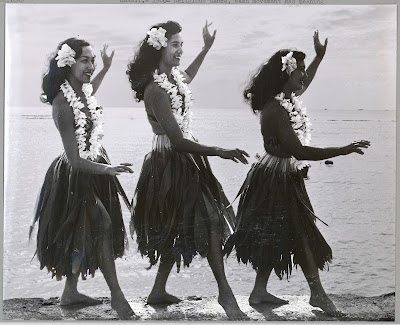 Title
"Hawaii Religious Dance, Each Movement has a Meaning."
Summary
This photograph of three young women performing a religious dance in traditional costume is from the state of Hawaii in the United States. The photograph is from the collection of the Columbus Memorial Library of the Organization of American States (OAS), which includes 45,000 photographs illustrative of life and culture in the Americas. Many of the photographs were taken by prominent photographers on OAS missions to member countries. The OAS was established in April 1948 when 21 countries of the western hemisphere adopted the OAS Charter, in which they reaffirmed their commitment to the pursuit of common goals and respect for each other's sovereignty. Since then, the OAS has expanded to include the countries of the English-speaking Caribbean as well as Canada. The predecessor organization to the OAS was the Pan American Union, founded in 1910, which in turn grew out of the International Union of American Republics, established at the First International Conference of American States in 1889-90.
Created / Published
Hawaii : Organization of American States, 1980 / Library of Congress 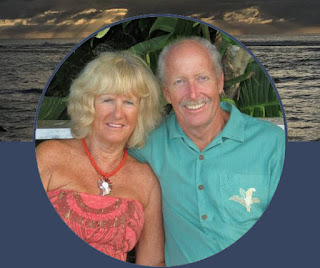