The Plymouth Rock folks, on their first Thanksgiving, had to rely on real live meat that was browsing around their huts, like wild turkeys and stray deer. When game got close enough the new settlers’ funnel-shaped muzzle loaders would knock ’em dead. These Pilgrims made it possible for the turkey to become the national Thanksgiving bird. It’s now so symbolic, we hardly would care to give thanks for another year of life without a turkey carcass setting in front of us at Thanksgiving time.

If the Mayflower had got blown up the Columbia River and the Pilgrims stepped on bunch grass instead of a rock, what would have become our main Thanksgiving dish? Why not that long-legged prairie rabbit of considerable size with the long donkey ears? According to those deep probing guys that study such way-back events, the jack rabbit has been around here way before the Indians wandered down into this country.

In 1916, the Gunter family, owners of the Rocklyn business district at that time, had jack rabbit stew for their main Thanksgiving course. These Rocklyn Pilgrim-like people went out into the pasture and picked elderberries from a tree-like bush. They made elderberry wine, which graced their lips between spoons full of jack rabbit stew on that chilly Thanksgiving day.

Now, what’s wrong with jack rabbit stew? One heck of a lot, if I had to eat it today. But when I think back to my toy playing years, it was "okay". It gave us all the nutrition we needed. There were lots of things besides that shot-up rabbit that were laying in pieces in our large, hot serving bowl. Goodies like carrots, onions, cabbage, and potatoes could be seen floating around. At dishwashing time, a few spit-out buck-shots could be found along-side our plates.

An uncle stayed with us one winter. Around sunset time he would like to massacre jack rabbits in bunches while they were on their dangerous march up to the straw-stack for food. Uncle had the sadistic habit of nailing all the rabbit scalps with their long ears attached, on the outside of our blacksmith shop. He was the only one in our immediate family circle that missed the old time jack rabbit stew when he moved to California. 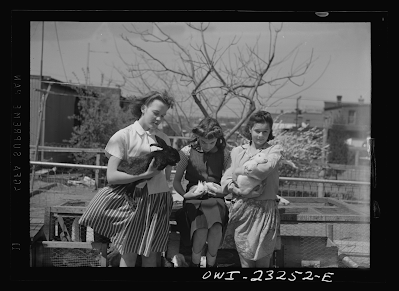 Title: "Children with rabbits which were formerly kept as pets, but now are being raised for food"
Horne, Joseph A. (Joseph Anthony), photographer / 1943 Apr. / Library of Congress 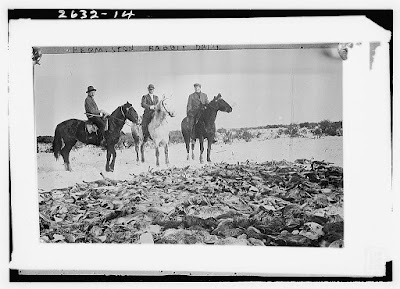