Pencil in His Feelings of Another Harvest

When dad was here on his harvest jaunts from California, Sugar would think we were having burial services for the combine instead of just storing it. Guess it seemed a little odd to make a ceremony out of it, but that's the way Dad and I operated.

While I was giving the self-propel the air pressure and water bath treatment, Dad would be writing diary-like articles on the side of the bulk tank. He would pencil in his feelings of another harvest that had just ended. Also, his thankful thoughts of being able to spend another summer with his family. Later, his notes were always varnished over to preserve them 'til the combine was put out to pasture or sold.
Finally, the shed doors were opened to the limit. With dad's hands signaling the right directions, it was a cinch to back the combine into just the right place. That usually concluded the service of putting the combine away.
"Mothballing Combines" Kik-Back Country, page 47, part 3 (continued)     (previous)    (home) 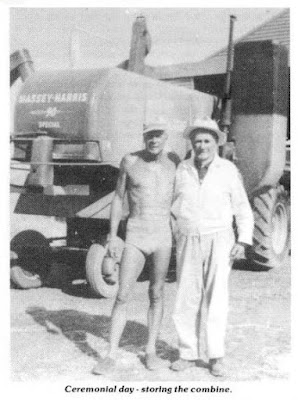