In 1889, the railroad reached a spot that was named Rocklyn, and a section house was built. Right now, that same section house is occupied by Ed Deppner, who is almost a century plant himself. He has seen the town of Rocklyn grow to a general store, a lumber yard that handled farm machinery, also a stock yard and three warehouse companies. Now, instead of seeing Rocklyn grow to a decent size town, Mr. Deppner saw the town get wiped out to where only his humble century old section house and himself is left. — Sunday mornings finds Great-Grandpa Deppner picking up his well worn Bible and catching a ride to the Assembly of God Church with the Hardys, where he is still trying to figure out a lot of spiritual things.

Like most communities, Rocklyn has pioneer homes that have been restored. Take for example: When the new generation of Mielkes grew to maturity, Doug, Ron and Robert, got married and began the chore of starting up the fifth generation of Mielkes. These three young farmers have a strong desire to carry on the fanning traditions of their grandfather by setting on the same spot of land that he did over 100 years ago.
But expansion was necessary. So a couple of the boys had to spread out to other wheat fields that were once owned by settlers a century age. Doug and wife Debbie settled on a farm that didn’t have an antique house that needed restoring. But Robert and Christy’s farm yard came with a pioneer house that needed some improvements and a touch of restoring to bring it back to its original strength and good looks.—Parts of this old house got built a long time ago when a guy by the name of Gus Borck got married. He just built an all purpose room to fit himself and wife in. But when kids started being bom, the house had to grow along with all the little Borcks. First it was just a extra room, then an upstairs had to be added etc. It made the house look a little lumpy from the outside, but since the Mielkes gave it a dressing up job, it looks attractive.
This expanding house was built along side of a natural seasonal lake. But what the new generation can do with earth moving machinery, boggles the mind. That old lake bottom got moved by dumping it on near by lava beds. Then by moving mountains of ground, to be used for future landscaping, a large everlasting lake was made—proving if your farmstead lacks the scenery you want, it’s possible to make it.
Now, the restoring of the original Great Grandpa Mielke’s farm house by Ron and Linda, is a story all by itself. (It should be written up buy some farm magazine) This determined couple gave the house more of an authentic look than ancestral Mielke did. They used advanced material and shaped it to fit into rimmed out cavities—bringing a sparkle to the house that originally was lacking. The cemetery plot type of fence, high on the rooftop, still serves with authority over this restored farm mansion.—After spending several years of their spare time, Linda and Ron were able to restore every inch, both inside and out, in time for baby Veronica’s arrival.
"Centennial Tour of Rocklyn" Kik-Backs No. 3, page 19, part 1 (continued)     (home) 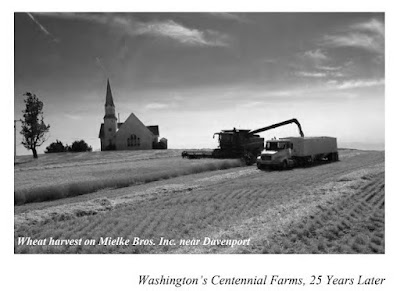 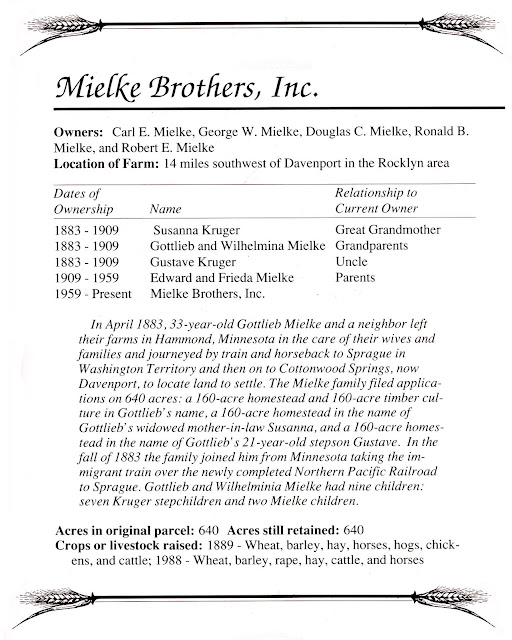 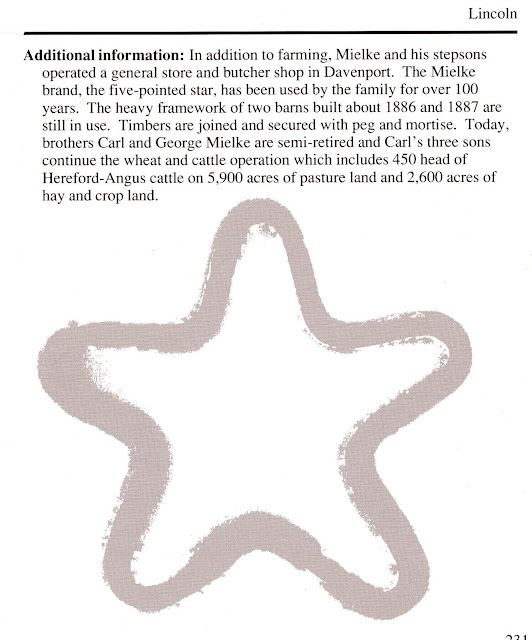 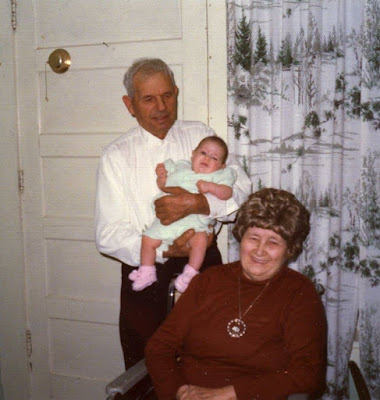