Cowboy Fun and Drink a Little

Recently I visited with a retired couple that love to tour out-of-the-way places. Their specialty is ghost towns and old mining holes that were dug out by obsessed men looking for a quick cure from poverty. They figured that forgotten wagon trails should be studied and written up.

I guess they are right. There are still heaps of things worth recording right here in our back yard. For instance, there were some events that took place years ago that didn’t leave any artifacts laying around.

How many of you with wrinkled skins remember the open space rodeo that was held in the middle of the vast grazing lands of Lincoln County? It was in August and the year was 1925. If you recall, it was a free rodeo. All the riders collected were sore butts.

That summer Dad and I drove up from California to see if our renter raised any wheat. For a couple of Sundays it gave us the opportunity to watch the cowboys go sailing through the air. This wild sort of stuff took place west of Rocklyn and south of Telford. It was out on the old Janett pasture.

Wade West was the foreman for the Janett Brothers pasture holdings. Wade rounded up all the cowboys and bucking horses he could find. This made it possible for the guys to have some cowboy fun and drink a little moonshine whiskey.

That big pie-shaped oasis out in the middle of nowhere was ideal for such goings-on. The rocks were missing and the grass was soft enough to cradle a departed cowboy that was on his way to a lower level. A small house and a few sheds stood up along side a row of pasture bluffs. A ‘moonshine still’ was in hiding. Only Wade West and some of his cowboy disciples knew where it was.

That first advertised Sunday, right after the noon hour, about 200 cars began coming in from a couple of rutted trails. Guys with chaps on made us park our rigs on the outside of this grassy flat. The old cars made a good barrier to scare the frightened animals back to the bluffs.

Who attended this opening event? Well a lot of neighbors, friends, strangers, grandparents, daddies and quite a few mommies. A set of little twins were seen laying in the back seat of a car. Their daddy, Oby Smith, was one of the cowboys that helped retrieve riderless horses that high-tailed it over the bluffs.

In the middle of the bucking matches, Deputy Sheriffs Cecil Fisher and ‘Dutch’ Van Hook drove up in a dusty looking car. They snooped around for quite a while, but didn’t find the liquor still. Later, they joined the large crowd by sitting on car fenders, watching the horses trying to get rid of their passengers.

During intermission, some of the more worldly cowboys formed a huddle and told some X-rated stories. During the rest period some of the riders strayed over to the circle of cars for a visit and to answer rodeo questions. When recess ended, a couple of guys on horses rode around fast like, kicking up dust. It was a signal for the riders to get back to the corral for more fun and punishment.

There was no squeeze-like slot to sandwich the bouncing broncos in for mounting. The riders used no saddles. They just jumped on the nervous nags from the side of the corral and tried to locate enough horse hair to hold on to. Fortunately none of the cowboys got hurt. All they had for first aid was a snake bite kit, and buckets of water. No loud speakers to announce in a glorified way who the riders were that fell off or stayed on. If you didn’t know, word of mouth did the trick.

Years later, when the Mielke brothers had the say-so of this spread of pasture, I looked over that semi-wild west bucking match spot of long ago. With the slugs of people and the circle of old time cars all gone, it was a mighty empty spot of grass. Cattle and horses still leave the same kind of tracks as they did then. Generations of livestock have chewed down that grassy flat hundreds of times since those summer rodeo days of long ago. "...forgotten wagon trails should be studied and written up."
Forgotten Trails / Earthlight Books 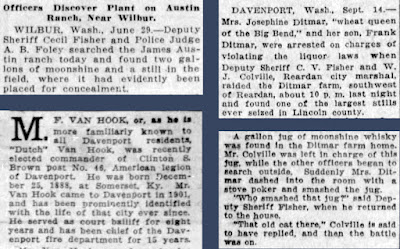