Rode Horses That Came In First

While attending Harrington’s Annual Fall Festival in 1987 we noticed that some of the local scenery was blocked out by a palace on wheels. A group of us began looking the rig over. A rear end diesel motor of high performance is used to furnish the power to push this traveling home down the highway. A remote control television is installed so the driver can see if anyone is tailgating the rear end.

Al Armstrong piloted this land cruiser all the way up from Turlock, California, so he and his wife, Connie, could take in Harrington’s Barbecue and renew old acquaintances.

After ending a tiring day of activities, the Armstrong’s private suite and living accessories awaits them by the city park.

For those of you that are not familiar with popular names around Harrington, you may ask, “Who is Al from Turlock?" Well, his long gone father, Sleepy Armstrong, made quite a name for himself after he finished growing up around Harrington. He got his start in the horse world when he rode horses that came in first. Sleepy’s specialty was relay racing. He had a lightning way of changing saddles, and soon became the world’s champion relay rider. For years he rode the circuit from border to border. As far as is known, Sleepy’s record has never been broken. Later Sleepy worked in movies with old cowboy stars like Hoot Gibson and Tom Mix. 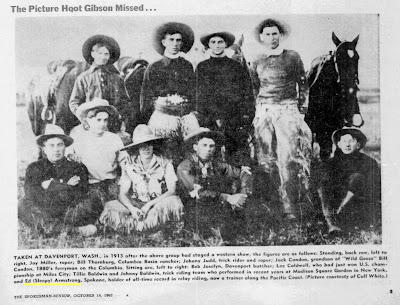