The Nitty-Gritty of Bygone Days

When World War One came to a settlement, Earl Rambo, a high school classmate of Paul [Maskenthine], opened up a drug store down the street a ways. One day Earl came up to Curley’s place and told Paul, “Say, I’d like to have you work permanently for me down at my place.” Paul said, “Oh I don’t know, I’m kind of a rancher and you have all this fancy town trade.” Earl insisted and got Paul to say, “Tell you what I’ll do, I’ll go out and harvest with Dad, then I will work for you.”

That fall, about Lincoln County Fair time, Earl Rambo was given license to operate a liquor department. Every boozer had to have a liquor permit, which ended all past shady deals.

It was the first day of the Fair when Paul went to work. “I was literally fastened to the counter writing liquor permits that day,” Paul told me.

When the liquor drinking guys tapered off to a less frantic flow, Paul stated, “I really liked it there. You were up where you kinda met the people. High school kids would come down at noon to get a doughnut at the bakery, then come in to the soda fountain side of the drug store, and get a soda and talk about football and basketball and other goings on up at the school. It was like a daily gathering of friends.”

Paul Maskenthine’s drug store sojourn lasted well into the time when Germany took its last crack at trying to lick the world. Paul gradually tapered off his long years as a druggist and farmer when Everett Brooks took over ownership of Rambo’s Drug Store.

The two sides of Paul’s life were busy ones. A spring morning found him guiding a row of horses behind a seeder. The next day he could be appearing behind a drug store counter.

Paul’s farm life took him through all the evolutionary stages of farm equipment. From the heading and thrashing outfits, on up to the modern combines. Punching header at a young age, he had to match his skill with the more weather beaten, mustachioed, seasoned crew.

It was a pleasure to get down to the nitty-gritty of by gone days with Paul the other day. Right after World War One, events made it possible for him to marry Anna, his sweetheart of many years. Their marriage brought forth two country bred daughters, Eleanor and Irene.

When they were newlyweds, they had a helping hand in that railroad drama, when Tanner’s bull butted the eastbound passenger locomotive into the ditch. On the way to church that morning, they picked up the engineer who was hitch hiking into Davenport.

We got to reminiscing about his dad, Herman, who after surviving a bank failure, was able to hold on to land he bought at inflated prices.

Some of the early day settlers took time out to help build better roads. Wandering travelers didn’t like to cross wide creeks, and canyons, so highway two went in every direction on its way west. Parts of the straightening out job was taken care of by the grandad of Judge Zellmer and Paul’s father. The two old timers built a bridge over the creek, so the wagon wheels wouldn’t get wet or mire down. Then they made an “S” grade to relieve horses from staining a gut when they tried to pull their load out of the canyon floor.

Telephone lines being built were like a chain reaction. When the line got to the Maskenthines’, another farmer would nail two by fours onto the fence posts to hold a single wire to his place. The ‘follow the leader’ line ended south of Rocklyn.

For four bucks a year from each telephone, a line exchange lady was hired in Davenport. This made it possible to tune in on settlers far beyond the horizon.

When I was getting ready to leave, Paul said, “I will be 93 in August. After I retired, my wife and I enjoyed this new home we built here in town. Anna loved flowers, and she made our yard beautiful.’’When I got to the door Paul stated, “I spent 57 years with Anna. She is gone now.” He pointed to the center of the room and added, “Anna used to sit in a chair over there, and we would watch television together.”

It’s just a question of who goes first, and who is the one left alone with memories. There is a recorded song that sort of breaks me up: “Honey I Miss You So.” (At this writing, Sept. 1986, Paul is very much alive at the Davenport Nursing Home.) 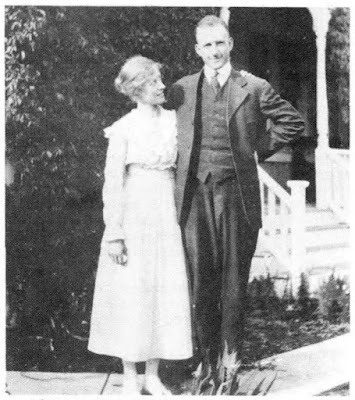 Anna and Paul Maskenthine at the beginning of their married life. 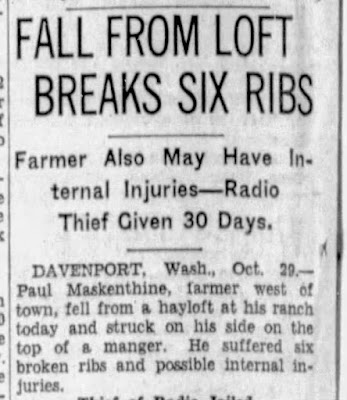 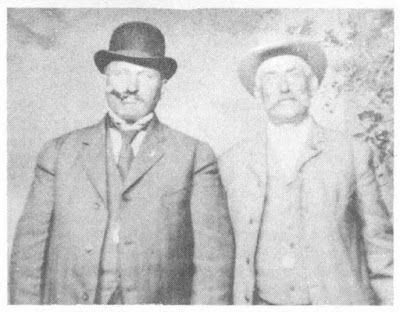 In 1909 Paul’s dad, Herman, and John Buck took a trip to Seattle and had their picture taken. It was sent back to their families with a simple question asked, "We are in Seattle what do you think of us?”