By...Twisting His Butt Right or Left

Years ago, the Northwest won the honor of manufacturing a combine harvester that tested the patience of a saint. In Idaho, some guys got out their pencils, and figured out how to build a combine on a beefed-up header frame.

To make their brainstorm come true, these guys hung on the following components: A cylinder, the length of the header platform, was attached to flail out the grain after the cut heads were laid back by the reel. A fanning mill was placed behind the cyclinder. The straw sort of tumbled out in front of the horses’ faces. They were chained behind to hitches. Their job was to push this outfit like a header, instead of pulling it from up front.

Right over the ground powered drive wheel, a platform was placed for sacking purposes. Elevator cups were installed to dump the thrashed wheat from the fanning mill type of separator into a sack that was hung there by an alert sack sewer.

The only other guy besides the sack sewer on this mechanical device, was a busy fellow doing a triple action job. He drove all the horses that were hooked up on the right and left sides of the driving platform. His legs straddled a heavy turning stick, and he sat on it like it was a saddle. By bracing his legs on the standing platform and twisting his butt right or left, this harvester was supposed to turn.

Right in front of the driver’s nose was a long header punching shaft that had to be lowered or raised for grain height, whenever he had a hand free for usage.

Those proud inventors of the northwest were so excited that they named their contraption "The Idaho Harvester" in honor of the state in which it was built.

This pusher type rig was never field tested correctly with live horse power. By pulling the rig from the back, it made the combine plow into the ground. Also, it caused great frustrations for the horses, and the driver when it came to turning corners.

George Sweezy, a Rocklyn farmer got stuck by buying one of those rigs. The community figured if anyone could make the Idaho harvester operate successfully, George could. After all, he was an ex-school teacher, mayor of Rocklyn, and an all around smart guy.

Well, Sweezy did make the Idaho work in a half-assed fashion. He made it into a push-pull rig by hooking some of the horses in front of the combine. The front team kept the combine from being pushed into the ground by the back team. Also the lead team was able to make the combine turn corners correctly. (Catch the picture?) It was the first and only combine ever built that eventually required two teamsters.

George Sweezy’s land was level, and his soil had enough rocks in it to help the light bull wheel turn out power for threshing purposes. However, Sweezy got sick of his pain-in-the-neck combine, and sold it to Wood Hulbert for a give away price that even ‘small fry’ Wood could not pass up.

Wood figured he had plenty of time to figure out how to make this nearly new combine work successfully. It gave him an opportunity to show those big wheel farmers he could harvest his own crop without their help.

But Mr. Hulbert didn’t have as much patience as he thought he possessed. After addressing a lot of naughty words to the combine, he parked the rig permanently alongside of his well used trail to the highway. Every time Wood went to town, he was reminded of the lemon he bought. 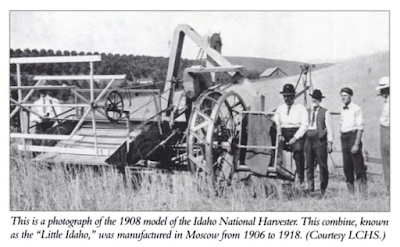 Moscow - Living and Learning on the Palouse 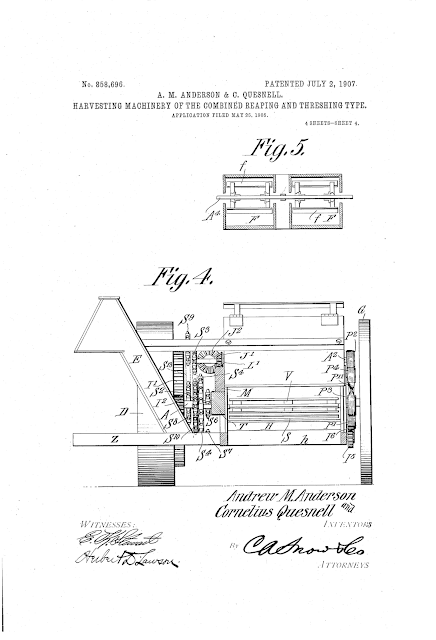 HARVESTING MACHINERY OF THE COMBINED
REAPING AND THRESHING TYPE.
APPLICATION FILED MAY 25, 1905