A Tuneful Way to Socialize

One morning when Sugar’s eyes popped open, instead of saying, “How’s my honey,” she told me she just got through dreaming that she was dancing with Howard Janett. Golly, it’s been ages since those old dances took place. Sugar’s sub-conscious memory clock must be starting to recycle.

We used to dance our legs off about every Saturday night. It all began when I introduced Sugar to the dance floor. In those pre-war, war, and post-war days, nearly every Grange hall kept their floors smeared with slippery wax to help out those with lead feet.

As far as the rural district was concerned, community dancing was as American as apple pie. It was a romantic, and sometimes not such a romantic era, especially when your heart throb chose to dance the last waltz with a competitor. But for some of us that had found our mates, it was a tuneful way to socialize with friends and neighbors. Guess that’s why Sugar, the other night, got to dreaming about one of her old dance partners. As a young married teenager, it was a thrill to be accepted as part of the established community.

Looking back, we did have a lot of fun. It was early in Sugar’s new life when she and the Knack girls thought it would be neat to throw a harvest dance at Telford. Articles were taken out of barns - like bales of hay, harnesses, lanterns, saddles, and old wagon wheels. Those barn yard articles were placed throughout the Grange hall. A talented Grange orchestra from south of Wilbur supplied a mixture of barn dance, and harvest moon music. Two of the dance sponsors eventually married a couple of ranch hands that attended that authentic barn dance.

During the heyday of Grange dances a lot of local big name orchestras were playing throughout Lincoln County. To the north and east of Davenport was the well known Rux Brothers Orchestra, featuring the king of the saxaphone, Virgil. The other orchestra working the Grange circuit was the McDougals, with Jack hot on the drums.

Not to be outdone, our own Rocklyn grown kid, Les Welch, got his start out here at Rocklyn by playing for the neighborhood dance fans. Les had that something that made his musical ability raise to the point where he organized that well known Mom and Dads orchestra. He sold recordings by the thousands, and got on national television by performing for the Hugh Downs show.

Then Les Welch’s career came to an end when sudden death took him away. Rocklyn made a second stab at trying to send another orchestra to national fame. The Sterett-Robinson group got their start by playing for Wilson Grange dances. But George and the Sterett brothers decided to stay in the cattle business, so they let the road to Nashville slide down the drain.

Then came the wave of local professional western dancers. When Howard and Elizabeth Janett got through training themselves to do those fancy steps, they had Paul and Elizabeth Clark introduce those precise dance numbers to us Rocklynites. They were aided by Bill and Lydia Buck, and ‘Chief’ Van Skiver, and wife Nettie. It was just a treat to get out of their way, and watch them gracefully glide through those smooth numbers.

I quickly put together a noisy amplifying system, and hooked it up to Howard’s old antique record player. For learning purposes, we had it made. I could slow this spring wound Victrola down so the puzzled ones could catch up with the music, or bring the music to a complete halt, so the rooky recruits could have time to untangle their feet.

It’s been years since we lived those days. Seems like dancing the way some of us knew it went out like a wet cigar. Years ago, the old and the young mixed country entertainment together. Then came the split. The Beatles really started it. Young folks joined the loud music, and did a lot of stationary wiggles instead of dancing. Somehow I miss those old dances. There was something about that lively old music that made you want to go go go. Then a sudden waltz was played, and you felt real smooth like. 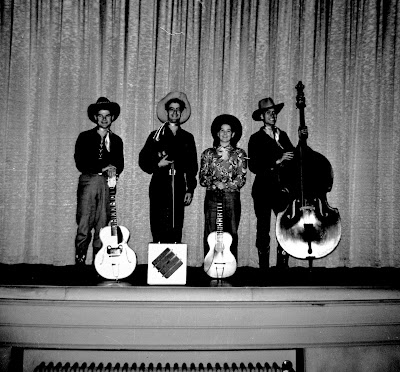 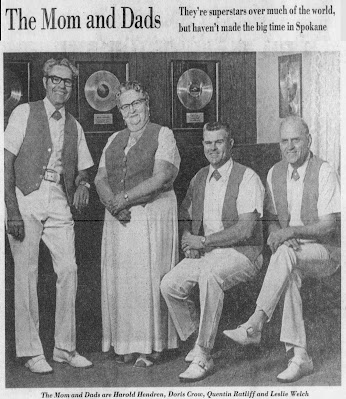 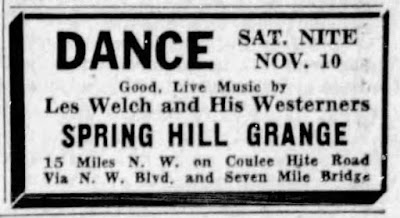 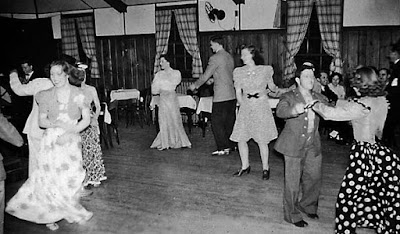