Flies Were Plentiful...Came With Your Meals

At Davenport’s Cottonwood Springs Park, a carved out sign reads in part: “Before white people lived where Davenport now stands, early settlers and Indians followed one of the finest trails in the Northwest, and camped around the spring that grew many cottonwood trees. In 1883, the town of Davenport grew up around this camp."This spot was one of the first ‘eating out’ rest stops for Indians and early white wanderers. That brings up the question. How come those cottonwood trees were found growing there? They were not native trees of this territory. Could it be that some Indians from far away fell in love with those trees and brought some seedlings to this happy hunting camp ground?—Carl Mielke stated that the rings on those large old stumps should have been counted before the city destroyed all evidence of the ‘in the beginning’ of those old cottonwood trees.

Eating out really got started when early settlers strayed too far from their homestead shacks. When all that rolling prairie got put into wheat, wagons loaded with sacks of harvested grain, were pulled many miles to warehouses that dotted the railroads every 10 to l5 miles. Dad’s homestead was a half a day away from Fellow’s Station (Telford). He would arrive there by noon with his wagon load of 30 sacks.

A. Y. Smith and his wife, Ada ran a small store and post office there. Ada also served meals for the wheat haulers, family style. During the fall Dad got to eat out there quite often with the Smiths, while his team got a treat by feasting on A.Y. Smith’s hay.

Close to the turn of the century Davenport boasted of three eating places. The first two, the Home Hotel and the Davis Hotel, were located along the west end of the creek that supplied water for all those cottonwood trees. Aunt Emma and Aunty Lou, as teenagers, worked at the Home Hotel and got acquainted with a lot of Davenport’s gay blades (the original kind). Beings these restaurants were located near the livery stables, flies were plentiful, and they came with your meals.—The elite Columbia Hotel that supplied the upper crust with dinners etc., was located up town on Morgan street. 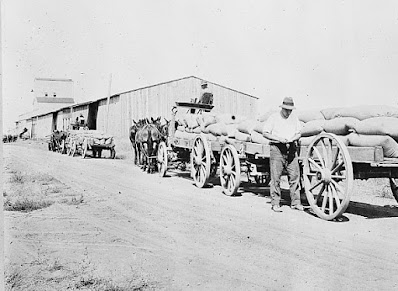 "...arrive there by noon with his wagon load of 30 sacks."
Farmers delivering their wheat to the warehouse, Umatilla County, Oregon / Harris & Ewing Photographs - 1936 / Library of Congress Prints and Photographs Division Washington, D.C. 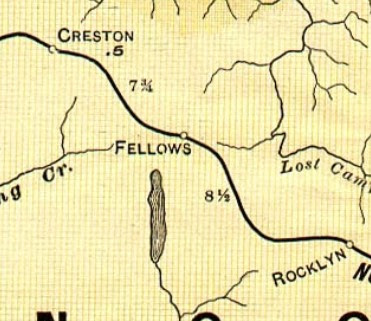