Apples Were Known to be Biodegradable

The other day, George Mielke told me that his dad wouldn’t allow rocks to be used for throwing at horses, because rocks on their wheat fields were about extinct. He didn’t want the field polluted with spent stones. To scare more pep out of the combine pulling horses, old man Mielke had the boys fill the rock box with cull apples from the orchard, as apples were known to be biodegradable.

Last week, while visiting with old timer, Carl Guhlke, we talked about how every string of work horses would, on the final round, pull their load fast because every horse was anxious to call it a day. Carl figured mules were worse than horses for that evening habit when it came to calling it a day. Carl used Chris Rienbold’s hired man and 12 head of mules hooked to a gang plow as an example. One day, on the usual last round, the hired man was enjoying a fast ride on the plow. But he decided to make another round. Instead of falling for that idea, the string of mules pulled the plow out of the furrow and couldn’t be stopped ‘til the plow and the hired man ended up at the barnyard. 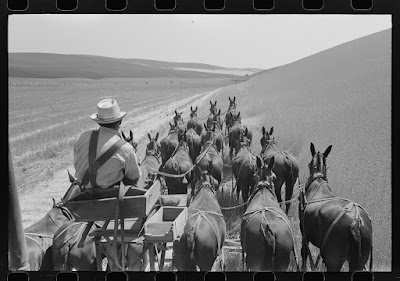 Mule Skinner - the rock box is on his right 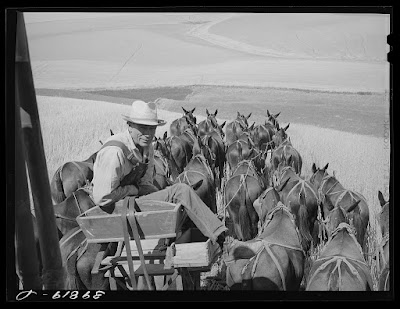