Up to 400 Believers and Sinners

Only time will tell what the New Year holds forth. I have always figured making New Year’s resolutions was for the birds. But I’ve got a habit that’s out of control, so I’m willing to try anything that’s a commitment to bolster my inner strength. Beginning January 1st, 1986, and to last as long as humanly possible, I resolve that I will not let Oral Roberts or any other ‘way out’ lucrative TV evangelist bug me anymore.

Sugar will have my blessing to switch stations when any of those guys with piercing eyes appears on our television tube. Why do these fellows upset me so? Guess I’ve been around too many of their kind.

My first association began during my early venture as a strawberry picker in California when I aided a tent-toting evangelist. It was during the time when the sensational Aimee McPherson disappeared from the face of the earth. It left her flock to carry on without a rudder.

This event caused religious fever to run high in certain groups. Aimee’s Four Square Gospel stations were going full speed. Other satellite organizations also figured the time was ripe to do their thing. Since Mother became entranced in fundamentalism, several dry-run, church-type meetings were held in our house. When the test ended the minister from mom’s denomination figured it was the right time to contact a traveling evangelist who had just finished lugging his folding tabernacle tent back from an Oregon crusade.

Upon contact, Evangelist Black agreed to take a chance at another crusade. This guy took a liking to me and gave me the opportunity to help him haul his tent down from Hemit to our place.

We had to wait a week for a Santa Ana wind to blow itself out. Then, with the aid of my berry picking friends, we were able to get that tangled mess of a tent erected. It wasn’t a big circus tent like Oral Roberts used on his healing crusades across the country. It was a three center pole affair that could hold up to 400 believers and sinners.

But things went haywire. Aimee McPherson showed up and blew it when she pulled out that rather bizarre kidnapping tale. After the authorities arrested her it destroyed any possibility for Mr. Black to preach around a story of that magnitude. He settled for some leisure living up at his winter headquarters in Hemit.

The tent stood erected for several months. It proved to be more of a curiosity to passing local folks than a place of redemption. Walt Knott, on his daily drives to pick up berries, never asked how come that oversized tent was parked on our property.

The tent was used for a while for Sunday School and occasionally church services. An old maid preacher would come up from Orange to explain her version of 'correct living.'

When spring came I returned this guy’s tent and trailer. As a reward for my faithful service, he gave me a 1913 model T Ford that a believer donated to him and was left at our place. Part of this relic was used to restore our old Model T for my flight back to Washington. 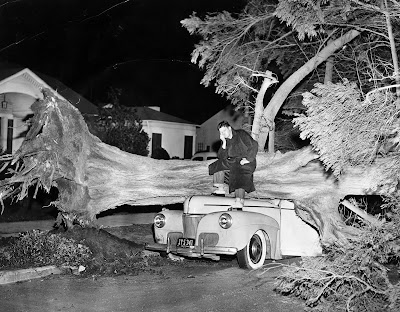