What happened to the frightened horse-power driver? Well, he got his arm hurt and was shook enough to shake a lot. He did get some nursing attention from Julia ’til his arm didn’t need any more soothing. He thought he had a good thing going with her, but before the accident, Julia had already given a husky sack sewer the glad eye. They had engaged in a lot of smiling at each other during chow time. Verbal communication took place during the breakdown, and arrangements were made to use Charlie’s buggy for a long ride to Odessa.

It was suspected that the jilted, injured guy got wind of the coming buggy ride, and took the axle-nut off of the wheel on the passenger’s side. When the buggy made a sharp turn as the couple pulled away from the cookhouse, the tall wheel fell off, throwing Julia out on the ground, and the sack sower landing on top of her.

She got up crying, and ran back to the safety of the cookhouse. In those days it was an embarrassing situation. Part of the crew was standing around witnessing the excitement.

For idle fun, some accused the sack sewer of falling on top of Julia on purpose. Embarrassed and in defense, he denied such goings on. The crew became divided, and took different sides.

The next day, for honor’s sake, the sack sewer asked Dave to be the judge, to clear the air. Dave, for jest, but in poor taste, told the young guy, in front of the idle crew, that he figured, by the evidence, that he purposely fell on top of her.

That did it. The guy quit, and six other sympathizers walked out with him. The next day Charlie had to beat it down to Harrington to try and scare up extra replacements.

As far as I recall hearing, harvest went smoothly from then on. The mule didn’t have to use his butt to hold back a run-away, because the tumbling rod never again came apart. Widow Dare later married a guy that turned out to be an alcoholic who gave her a rough time 'til she left him. What happened to her daughter Julia, no one seemed to remember.

Johnnie Harding never had a chance to settle down and find a mate. Some years later, he died during a flu epidemic. Charlie went back to Sprague to marry his first love, Myra Ekins, and my dad married my ma. 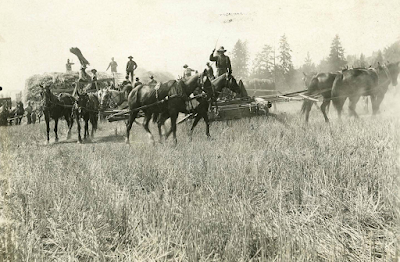 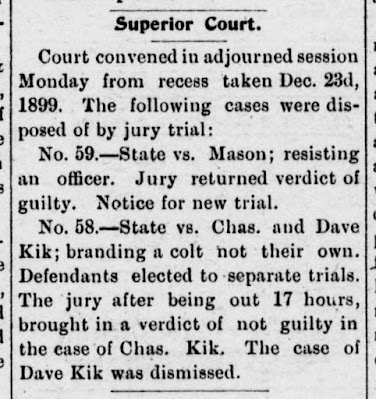 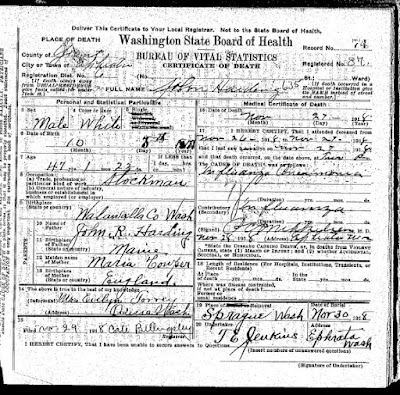