In recalling the past, one can’t help but wonder why the combine-harvester wasn’t invented ’til the present time. For a period of time, a mental block must have prevented anyone from figuring out how to get the grain from the header to the thrashing cylinder. On the other hand, we must realize it took one heck of a long time in the process of machinery evolution to get as far as we did. I guess our minds are made to think one step at a time.

We all know it all began when a guy by the name of McCormick figured out a way of getting the grain cut off, but it just layed flat on a platform. From then on, Mr. McCormick was stuck. He had to have a guy run along sideways with a hand rake, and yank off the fallen wheat back onto the ground. It took another figure-head to figure out a draper system, so the reaped stuff could be dumped into a moving header box.

The birth of the combine happened when a couple of guys down in central California thought of putting the header on the separator, and pulling the two connected things together. This brainy idea saved the wheat grower piles of dough, and made him an independent farmer.

However, those old thrashing days were picturesque. As a kid, I would catch a ride with a header box driver, then watch my dad punch the header. It was magic to watch the cut-out circle get bigger and bigger, while in the center, a dome-like stack was getting taller and taller.

Later, the corners of the fields had to be cut out. I marveled at Dad’s skill of turning the header team in the wrong direction, so the header would turn in the right direction. When things didn't go right, a lot of hollering went on. 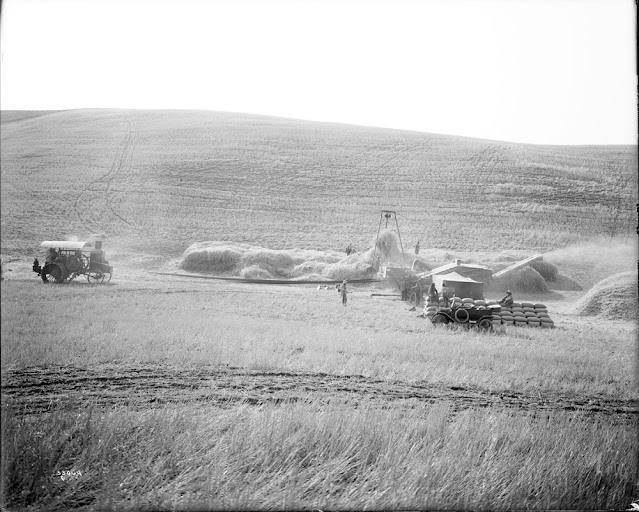 Reaping, threshing, winnowing – combining all three operations into one led to the invention of the combine harvester, simply known as the combine. A Brief History of the Combine - IronSolutions.com