A Photo in My Mind

As a young lad I remember well what harvest was like in Lincoln County before World War I. This was before the glass enclosed paradise where a guy sits on top of a self-propelled combine pushing a few buttons and turning a steering wheel so that he can stay where the wheat is. It has been known in the Davenport area that more than 3,000 bushels has been laid away in one day by just one man, with the aid of a truck driver (sometimes maneuvered by just his lovely wife.) That adds up to just two people!

Now for a quick summary this morning while waiting for the rain water to get out of the grain so Sugar and I can get this crop out of the field. All that I saw as a young guy stayed as a photo in my mind. In those days it did take a lot of people help to get the crop into the hands of the buyer.

Take one year for example. It must have been 1914. Just as the grain was turning ripe, Herman Maskenthine’s outfit moved in and began what was called the heading outfit. Their job was to cut off the standing wheat and stack it for the threshers at a later date. A circle was started with the header in the center of the field, if you had a center. Our fields usually didn’t have one.

The cut wheat stack was placed there for the threshers, which later set up a carnival of equipment to knock hell out of the wheat and put the grain into rows of sacks. Some heading equipment had derricks. If they did, the stacks could be made to look like huge round domed sponge cakes. Otherwise hand pitched stacks were made to look like bread loaves. They were usually placed side by side with room enough for the threshing derricks to be moved in between later. That year, the crew that it took to harvest my Dad’s crop consisted of the header puncher who maneuvered six horses in an odd way, straddling a steering stick, and the loader that sat on the header spout till another header box drove under him. Three header boxes, were employed each one requiring an operator, known as box drivers. Rather a skillful job.

The stacker had a derrick driver, usually a big kid eager to do a man’s job but had to take a lot of cussing from the stacker. And Irma, the heading outfit's daughter, had to be called a helper, as she helped Mom shell peas and get dinner ready for the heading crew.

Just to get the standing grain sawed off and put into a heap, it took eight people, plus Mom.

Next, after a few weeks, came Mike Maurers threshing outfit. I wish I could take the time to explain the equipment piece by piece. It was a romantic harvest scene. As a kid I thought dreamily, how I wanted to be a steam engineer and pull those levers and whistles with such authority and keen knowhow. Otherwise, he didn’t seem to have much to do but sit on a shelf near the throttle levers in case someone waved to stop the works.

Now recalling, it took one engineer and the fireman to run the thresher. I believe the fireman was known as the fellow who hauled the straw from the straw stack with a cart, back to the engine to be shoved into the fire box for making the energy. Some had a guy hauling water if the supply source was farther than over the hill.

To feed the stationary separator from the setting, it took two men each operating a Jackson fork that dragged a large forkfull on a large flat table that was built on wheels - two fork drivers. From this table four hoedowners used a fork that was mashed into a 90 degree angle, making it into a sort of a hoe. The four guys worked in pairs, pulling the unthreshed wheat into a Jackson feeder that fed into the cylinder, with the other two changing off every twenty minutes because they were pooped.

Then there was the separator tender. He always looked busy, moving his eyes and walking around with an oil can.

As the grain came out of the long spout, a guy that was called a jigger was at work. He put the sacks on the spout and bounced them up and down to get more wheat in them. Then sort of handed the filled sacks to the sack sewers. There were usually two of them and they had to buck them into long rows of stacked sacks. (If there was no bucker.)

Usually the outfit had a “flunkie” but he never cared for his title. Sometimes a straw stacker was hired; I remember I used to watch one. He had a face full of whiskers, and was continually trying to wipe the chaff out of his beard. It seemed like the straw blower and his face always were pretty close together.

In the case of our operation there was no cook house crew, so it was up to my good Mom with the aid of my aunt to feed the mob.

Now if I am right, that totals to around 13 for the harvest crew, eight to put it where it could be threshed - a total of 21 men. And the wheat was still nowheres near the warehouse. That was the job the farmer himself had to do during the long, strung out days after harvest.

Since I scribbled out this article for Sugar to type, I think I’ll go out and see if it is dry enough to push the starter button and get to harvesting. 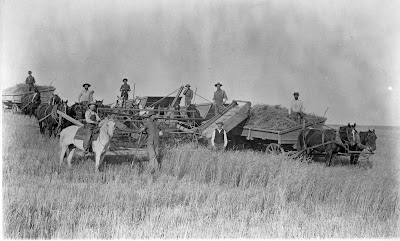