Blasting in the New Year

A new year will soon get started in the middle of a rough winter. “The frozen soil is in no enduring danger, and the heavy death upon the earth is no lasting peril,” so said Kenneth Patten, while he was fooling around waiting for spring to come. It won’t be long now for the sun to start climbing the sky, and darkness will again be pushed back a little each day. The buttercups and the green grass will be waiting patiently to make their appearance.

Whether you will be helping to get this new year on the road with some sort of ritual is a matter of choice. 1987 will come on schedule, even if you don’t celebrate its grand entrance.

In the early days it wasn’t possible to jump into a car, and go tearing off to some noisy night spot, just to see the new year come in. When a lot of old settlers got sleepy on New Years Eve, they just blew out the light and went to bed.

There were some that did what my dad used to do. He saw to it that he had some shotgun shells left over from shooting jack rabbits so he could shoot the old year out and shoot the new year in.

The habit of staying up until midnight didn’t exist for dad in those days. When 10 o’clock arrived on New Year’s Eve, he would drop off to dream land in his reading rocker. Us kids had the fun of staying out of bed real late, so we could wake dad up before midnight.

Upon waking, an excited look crossed dad’s face as he jumped up and grabbed the old shotgun on his way to the kitchen door. About a minute before the New Year, we would holler at dad to shoot out the old year. He had roughly a minute to reload the gun so he could blast in the new year.

When our vocal chords finished welcoming in the new year, the party telephone line began ringing. Neighbors would shout to each other, “Happy New Year!” Either you would try to ring another neighbor, or they would beat you to it. Usually it wound up with three or four different families visiting happy like at the same time.

Later in life, some of us young folks got tired of waiting for the new year to come in at home, so we went out with friends to celebrate. Later we gave New Year Eve parties which were a lot of fun. Local churches also became involved, and put on some church approved party games. Just before the old year clunked out, the party attending minister acting as the chaperone would ask the Almighty for guidance through the coming new year. The Rocklyn country church still carries on this traditional way of accepting the new year.

New year partying with our Spokane friends has been very enjoyable for Sugar and me. Attending those new year celebrations is becoming a little scarcer for us. Seems like bad weather and drinking drivers is sort of taking the fun out of it all. We may soon revert back to the days of blasting in the new year with the old shotgun.

Sugar and I are thankful for a lot of things this past year. Like being alive, for one thing. Have a happy and safe new year! 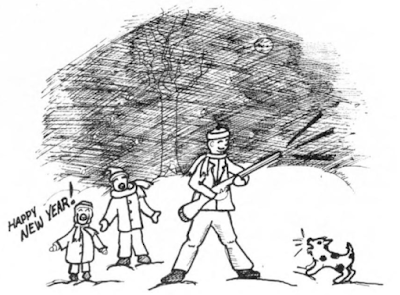