After attending a series of Christmas church programs and services, one soon begins to realize that half of our past and present activities are religiously oriented. Like any organization or business, a lot of religious folk with good intentions have been taken in by the very persons they thought they were helping.

A few weeks before Christmas, nearly 38 years ago, a con-man hit Davenport with his son, "Little David, the miracle child." A fundamental church with good intentions sponsored this child-wonder that was supposed to be filled with the gift of delivering powerful sermons.

The setting was ideal. Everyone was in a good pre-holiday spirit. Peace on earth, good will toward men, seemed to have been in practice at that time. It didn’t take long that night to pack the church. It was kind of cute to see Little David sitting on the pulpit chair with his feet dangling half way to the floor.

Little David’s dad started the program off by telling the congregation that his ’power-packed’ boy wanted to be with his mother during Christmas. But they didn’t have any dough to make it back to mama’s house.

The local pastor was stuck with this gimmick before the show got started. He had to stand up and act like an auctioneer by asking the crowd, ‘Who will give the first $50 so Little David can spend a joyful Christmas with his mother?” When the requested amount was lowered to a respectful figure, contributions started to roll in.

When the donations were safely tucked away, the ’boy wonder’ went through his well schooled antics. He was like a wound up robot, jumping up and down uttering religious statements. With a fist poking high in the air, he made himself momentarily invisible when he walked from side to side of the pulpit. It was such an act, I couldn’t resist recording it on movie film.

When Little David got wound down, a lot of young folks went up to the altar and received a Bible marker. Later, Little David’s daddy tried to collect five bucks each for the cardboard markers.

A few weeks after the father and son team left Davenport, Little David must have longed to go back to a normal little boy’s life. I guess it was no fun seeing Papa pocket all that dough. So he ran away when his dad wasn’t looking. David found his way back to his grandparent’s place. Later when papa came back to pick up his flesh and blood meal ticket, the law moved in and arrested him on charges of child abuse. 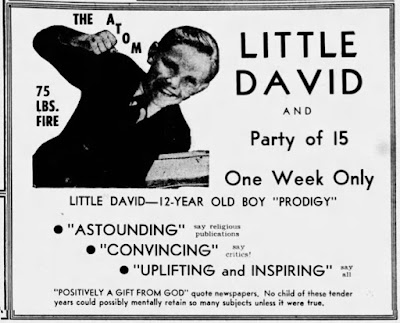 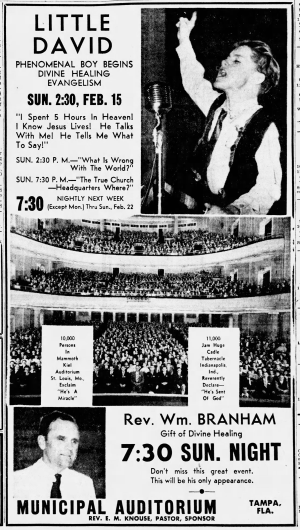