I am mildly surprised at the interest there is in Aimee McPherson, especially since half of the population wasn’t born yet when Aimee was putting on her show. She touched the lives of many sincere Inland Empire citizens that dug her Bible "Barnum and Bailey" style of antics. Radio was in its infancy when Aimee installed a radio station on top of her Angelus Temple in Los Angeles. It was powerful enough to penetrate a lot of old battery operated sets in Lincoln County. In fact it was Aimee’s hanky-pankyness with her radio operator that eventually caused her downfall.
During Aimee’s money making days she had customers from as far away as Rocklyn. In fact, some took their ailments all the way down to the Angelus Temple for Aimee’s touch of magic. They did receive strength enough to bring their ailing bodies back home.

After the turn of the century Los Angeles was notorious for its exotic cults. Aimee McPherson is best remembered of all such evangelists. Little old Aimee’s life began in 1890 in Canada, finally wound up in China where her first husband expired. Upon returning to the States, she married Harold McPherson. That marriage ended in divorce when she turned to full time evangelism and healing.

Aimee was a dynamic and attractive woman. Fame, money, power, marital relationship, and that healing gimmick made her the center of attention. Highly successful, she settled in Los Angeles where her followers put up a classy temple for their queen.

With the offstage help of her mother, ‘Ma’ Kennedy, Aimee conducted revival services in theatrical style, dressing to express the theme of her sermons. On one occasion Aimee rode a motorcycle down the aisle wearing a policeman’s uniform for a speech on “God’s Law.”

Let’s go back to 1926 when Aimee did a sensational five week disappearing act that brought grave charges against her. She must have figured she needed more notoriety. At one time 45 legal actions were pending against Aimee.

Aimee’s biggest production got under way when she went for a dip in the Pacific ocean. Scene number two: Presto, she disappeared from the face of the earth. Five weeks later she was found stretched out horizontally on the edge of a desert asking for water. Aimee claimed she was kidnapped by two burly guys, and their girl friend, Rosie. They carted her off to the middle of the desert, and placed her in a small shack. When all the kidnappers went for canned goods, Aimee said she was able to chew her bindings off and took a 20 mile walk ’til she found a road to collapse on.

The prosecuting attorney’s version of Aimee’s escapades were slightly different. He figured she ran off with Armstead, her radio operator, to shack up with him at a snazzy place called Carmel By The Sea.

Things did look a little fishy when Aimee wasn’t dehydrated, and her shoes looked like they had only been worn on carpeted floors. Her tracks and the desert shack could never be found.

The events that followed turned into a three ring circus. All during Aimee’s trial her followers put on a weekly parade through Los Angeles streets. One week a large float had Aimee humped under a cross. It was supposed to represent the persecution she was going through. Those scores of charges against Aimee turned into sort of a mistrial. It could have been caused by prosecuting attorney Asa Keys not keeping his nose clean. He was charged with some sort of wrong doings too, and had to set in jail for a while.

The trial shortened Aimee McPherson’s career considerably. By 1942 the Temple had already begun to be just a tourist attraction. Aimee would perform but the dough didn’t roll in bank-vault style. She took to the road to spur interest.

My dad was, in a small way, fascinated by Aimee’s showmanship. Sugar and I took him to hear Aimee for the last time in 1943 when she made a personal appearance at the Masonic Temple in Spokane. It wasn’t long afterwards that Aimee Semple McPherson called it quits, and took an overdose of sleeping pills. 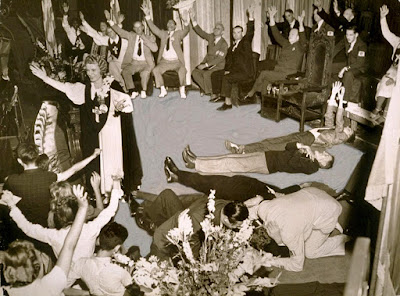 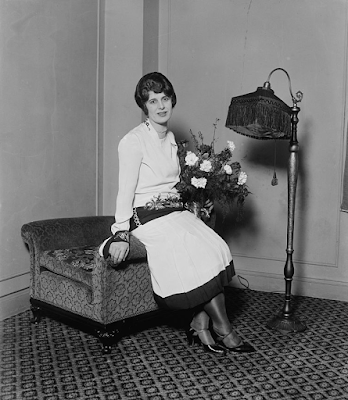 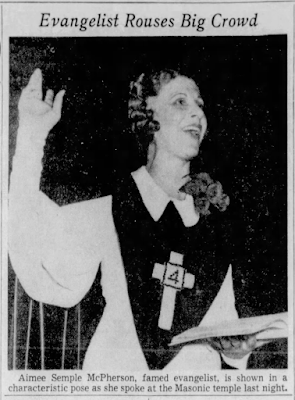