It Made a Guy Dizzy

Except for 'The State', the few movie houses downtown are just small projection rooms. The Fox is now divided into three parts. Some outside shopping districts do have newly built cinemas for those that want to get off their TV chairs for a change in atmosphere.

The State Theater is older than it looks. It has a stately history of lots of stately events, including the world premiere showing of "Vision Quest," a "made in Spokane" picture. Although not an earth shaking movie, Spokane does have the background for movie making.

The Fox was built on the eve of the depression, at a cost of a million bucks. It was able to survive all through the depression years. For many of us, it was where we saw our first talking picture. The Fox handled the more expensive traveling stage shows. Tobacco Road was one of them. Although it is a classy theater, it projected Spokane’s first pornography film in those no no days. A policeman stood outside to see that only matured eyes were allowed to go in.

When that large historic auditorium at Main and Post was torn down just before the depression, Spokane’s bright lights started to dim. Hard times started in by closing the Orpheum’s doors. It was a dream theater, right out of the past with its fancy 19th century styling. The stage took care of the Pantages circuit, and other traveling vaudeville acts. The receivership didn’t want to spend the money to take down the marquee sign of Mae West, in “She Done Him Wrong.” That advertisement was left hanging over the street for months.

The old Hippodrome Theater caved in too, but was never able to revive itself. The Hippodrome wasn’t as large as the Orpheum, but it had all the historic trimmings of an old time theater. It was in a ghost like condition when some revival minded evangelists moved into the Hippodrome. They used it to warn anyone stopping in that the world was in a heck of a shape. Later the cold weather shut down their nightly free warning messages. When spring came, it was torn down as a WPA project.

At that time, the wheat price hadn’t raised much from rock bottom. The bread and soup lines on the east end of Spokane began stretching out real long. The unemployed took over a large vacant brewery, and named it, "Hotel de Gink."

Another theater, the Post Street bit the dust, but it didn’t say shut as long as the Orpheum. It had the largest stage ever built in Spokane, and also the tallest ceiling. Three balconies graced the inside, one on top of the other. It made a guy dizzy looking down from the top to the stage.

At the height of the depression, between 1932 and '33, the Post Street managed to open again. Mainly because the Post Street let its doors open to a burlesque circuit. By showing two full length movies, and a risque stage show for a matinee price of 15 cents, people came. A charge of 25 cents caught the wealthy evening trade, after the supper dishes were put away. Ironically when I took in the 15 cent show, one of the feature pictures was titled, “If I Had A Million,” starring Gary Cooper.

Around 1945, the Passion players from the Black Hills of Spearfish, South Dakota, were able to stop over and present the Passion Play. They found the Post Street stage large enough to hold all the local extras, animals, and the paraphernalia needed to put on that spectacular religious story.

It was always a treat to treat close friends to their first talking moving picture show. Some turned me down flat for religious reasons. My folks never missed a Will Rogers or a Shirley Temple picture. Country towns weren’t too far behind Spokane in installing a ‘talkie.’ But Spokane’s large screens, and stage shows captured locals when they went out-on-the-town. 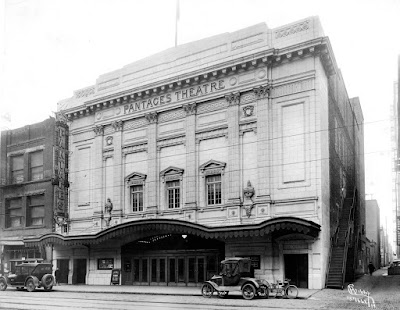 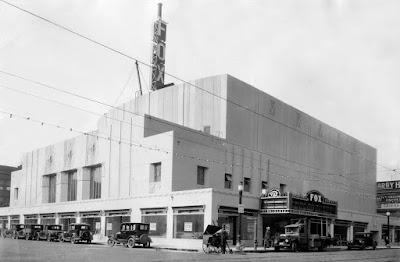