A Sled-Load of Excited Little Ones

Once again Christmas time is here. It’s interesting to go over our past childhood Christmases. Every event was brand new to us then. We have a lot to be thankful for, as most of us will soon complete another year. We Christmas children of the past are now playing the roles of parents, grandparents, or the childless ones. It’s how we found ourselves cast in life.

Kik and his waifs were the first Germans to arrive on Rock Creek. The Irish beat him there. They included the Murrays, Brislawns, Belfrys, McCafferys, Woods and McGreevys. The farming type of immigrants started pushing into Edwall country soon after, and included Mielkes, Polenskes, Krones, Scheffles, Kintschis, McPhersons and the Minkles from Wallula.

Santa Claus came a few days early that year [1880], when Dr. Clowe sent an old prospector on a horse up to Kik's cabin, with four red tin horns and a large jar of horehound candy. The Krones made it possible for Kik and his brood to have their first real Christmas. Kitty and Sally [Kik's horses] pulled a sled-load of excited little ones through a wilderness of snow. When the Krones’ cabin came into sight, their father told them to blow their red horns. Blow they did. The horses ran away. The sled turned over, breaking a runner, and the little ones landed in the snow. Their father spent the rest of Christmas day trying to catch Kitty and Sally, while the children walked to the Krones’ house.

“When we walked in,” my dad told me, “we smelled pork sausage frying. I’m sure that I never in my life have smelled anything as good as that meat cooking. To this day I often think of that Christmas long ago, when we entered the Krones’ cabin for Christmas dinner. Mrs. Krone also served sourdough bread.” 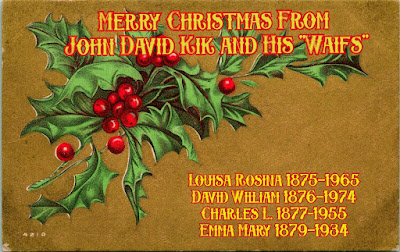 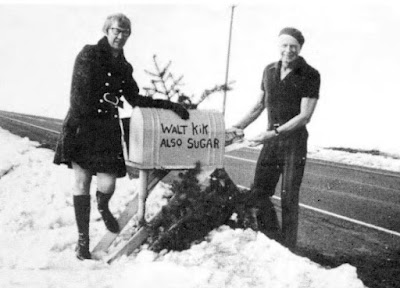