A Bit of Pioneer-Like Usage

Wasn’t it neat that George Washington was a surveyor on his political days off? He advised early day Americans to explore the Northwest. This advice eventually made it possible to create the State of Washington, so we could have something to celebrate.

All this came to my attention when Lincoln County Museum put on the last hurrah in the celebration of the first 100 years of statehood. At the right time on November 11, 1989, historians of Lincoln County released scads of balloons—then descended back to the warmth of the museum meeting room for recognition of many accomplishments throughout the centennial year. The evening twilight found a covered wagon setting on the museum grounds, waiting for Gerald Zellmer to hook a couple of faithful horses to its tongue and doubletrees so it could be taken back to its shed.

The wagon must have felt a bit of nostalgia that evening as it ended a successful year that will be remembered for a long time. It was a year before that this wagon had to wait ‘til driver, Gerald Zellmer, delivered Don Schibel, Joyce Denison, and Frosty Freeze from the Court House to the Memorial Hall in his surrey. They all delivered the Governor’s message, announcing the opening of centennial year.

Finally on Pioneer Day in July the wagon got its chance to have a hand in celebrating the centennial year when it paraded down the business streets of Davenport. The following day, the centennial wagon was left on display during a camp-meeting type of service in the park.

Then came that long centennial trail ride across the state where, with others, Zellmer put the wagon through quite a bit of pioneer-like usage. It helped make centennial history through the news and TV coverage, along with other rigs and guys riding horses—This wagon is well qualified to represent itself in parades and across the state as a relic of the past. Years ago it got its start in this world by hauling wheat into town from the Gilbert Gauger farm.

The main driver of this wagon is also well qualified to represent centennial stock. The records show that Gerald’s grandpa, Emil Zellmer, homesteaded at Rocklyn way before Washington was a state. In 1889, Pioneer Zellmer earned some scarce money, when he helped build the railroad that went by his homestead. Later, his boys staked out farms around the Davenport area. 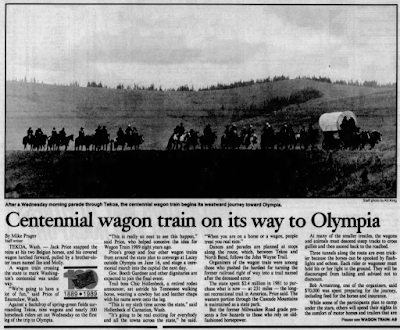 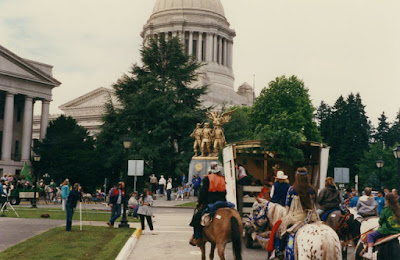 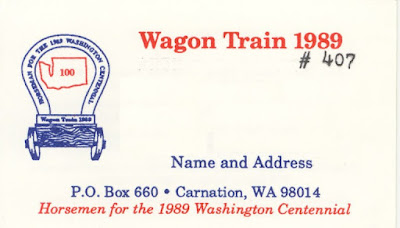