We Receive Nine Other Papers

Besides receiving the Spokesman-Review and the Davenport Times, we receive nine other papers. Easter comments were found in all post additions.—The Wilbur Register featured happy little kids stamping through weeds on a bluff above Wilbur looking for Easter eggs that a busy Lions Club bunny had hidden.—The Coulee City News Standard had an excellent action shot of little ones scampering for Easter eggs.

On the front page of the Odessa Record was a large picture of Cara Carlson, who wasn’t quite sure how the Easter bunny gets all those eggs spread around the three Odessa parks, just in time for big bunches of kids to come and gather them up.—The Odessa 2nd Graders wrote, “We are the Smoke Free Class of 2000. That means we have a goal never to smoke, and we will graduate in the year of 2000. If we don’t smoke we will live longer.”

Linda Colbert reported in the Sprague Advocate that the kids around Sprague dam-near didn’t have an Easter egg hunt either. The dogs were hunting, finding, and eating the eggs as soon as "Bunny Kathi" was hiding them. By changing location to a distant place, kids were able to hunt eggs and meet the Easter Bunny.

The Star Newspaper, that serves the Grand Coulee Dam area, featured a picture of a group of local Christians high on Crown Point, overlooking the dam, Easter morning. Just as the sun came up over the coulee wall, they sang, “On a hill far away... ”

A quick scan through Pendleton, Oregon’s Agri-Times says that there is a big jump in aphid population in Oregon and Eastern Washington. “The concern is very real,” so says the paper. Also conditions are just right for wheat rust. Are they trying to scare us?—In the last issue of Nespelem’s Tribune, it seems like the Indians are quite happy on the Reservation, minus problems. But there is some surprising things going there to advance their cause.

And of course, we take the Big Piney Roundup paper of Wyoming. It does report things different than around here. In cowboy country, cattle and wild animals are the ‘in thing’. Articles are written up in detail, which make interesting reading. A small problem has developed there when area ranchwoman, Jane Wardell, stated that, “If these trails around here remain open, the moose moving to lower areas will remain in those areas throughout the summer, which will result in bad hunting in the fall.

DO NOT abuse animals in Big Piney country. Terry Amrein was convicted on eight counts of cruelty to cattle. He was just sentenced to four years in jail and $6,000 fine. He could be released to pursue his appeal upon posting $40,000 cash-only bond. 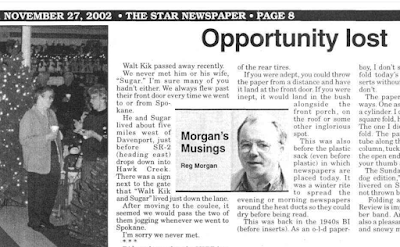