Plow into the Enemy at Full Speed

The Spanish-American War was a short one, but it lasted long enough to get Lincoln County involved in furnishing some horses for the U.S. Army. The purpose was to put the soldiers on horses so they could do a better job of chasing the Spaniards off the Philippine Islands. The Army figured Sprague was a good spot to find some horses tough enough to ‘make out’ in the Philippines.

An officer and a couple of helpers set up headquarters somewhere in Sprague and stayed around a week buying horses. They paid the same price for any cayuse whether it was middle-aged or young, as long as it could be ridden. The only other requirement was that they had to be able to be led up to the army inspector, who would walk around the cayuse. A nod meant to put the excited animal in an assigned corral for shipment.

Uncle Charley and dad were in partnership with Jack Munch on a horse ranch located along Sprague Lake. When word got out that army buyers were coming to Sprague to buy horses, Charley started consigning some of the ranchers’ stray horses on a commission base. Another well known guy in the community. Bill Marco, also went out and rounded up available horses from a different location.

Charley and Marco rode their own assigned string of horses. They didn’t mind getting their bodies jarred to pieces. Charley proved to be the better rider, so was able to sell more bucking horses than Marco did.

The last day that was left for buying, Charley rounded up some of Marco’s rejected horses, and was allowed to run them through the corral again. The ornery ones that Charley was able to hang on to ’til he could climb off in dignity, the government bought. I’m afraid those semi- civilized horses the Army bought at Sprague that year, gave the cavalry no choice but to plow into the enemy at full speed.

Of course, Charley walked off with much more dough than Marco did. This made Marco sort out some logical reasons that were appropriate to argue with Charley about. Not very nice words started passing from lips of the acquaintances. Finally Marco hit Charley on the nose hard enough to break it. Then he pulled a knife on Charley and ripped a hole in the back of his coat.

This called for court action. Charley had him arrested. At the hearing, the judge vindicated Marco for trying to butcher Charley with a knife, since there were no witnesses to the dangerous frolic that took place in a barn.

Bill Marco left Sprague for parts unknown. Then of all things! About 35 years after the Spanish-American War, Charley and Marco ran into each other face to face on a Los Angeles street. Right away Charley got pretty excited. Aunt Myra, who was with him when the meeting of the bodies took place, had a hard time calming Charley down. Finally Marco had a chance to ask Charley for forgiveness. He said he got religion since that trial of long ago, and was a preacher in a downtown Los Angeles mission. According to aunt Myra, all Charley had to say then was, “Well, I’ll be darned.”

What was life like around Sprague when the Philippine Islands were getting a working over? As seen through my dad’s eyes, Sprague had recovered from that big fire. Ranchers were busy trying to eke out a living from between the rock bluffs, and those that were farming the upper lands were doing very well. After witnessing several carloads of native horses fall into government hands, some young men figured it would be an adventure to join the Army. But when rumors got around that soldiers were dying like flies from malaria, none were known to sign up for doing a stretch in the Philippines.

However, one well known guy did join up. Our own Judge Nevins was a Spanish-American War veteran. When the Judge died, he probably was the last known veteran of that war from this area. 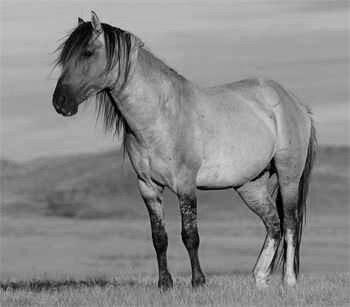 "Cayuse Pony" / HorseBreedPictures.com
Although the settlers called most horses raised by the American Indians "cayuse ponies", the
Cayuse Indian Pony of the Northwest is a distinct breed which originated in the 1800's. OffBeatOregon.com 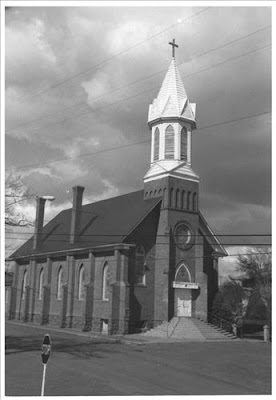 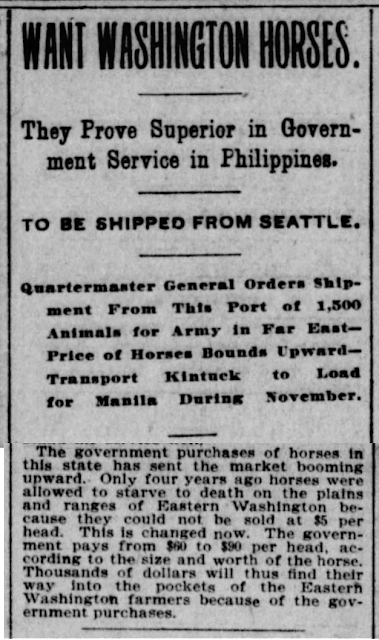