Kids Are the Best Kind of People

Helping Sugar with her 4-H clubs throughout the years, gave me a high. Kids are the best kind of people, because everything you do for them is still new, and it’s easy to make them happy. Besides you can act like a kid with them, and enjoy the fun part of life.

It all began when we were fresh married. With the aid of a brand new county extension agent, Alice Gimlin, Sugar was able to start her first 4-H club. Lacking in experience, her group did manage to make a lot of gooey cookies, and helped in community paper drives and stuff like that.

A few years later, with her second group, Sugar didn’t giggle as much and was able to make a steady successful 4-H leader. Being a flunky, I didn’t have to advance so fast.

I think Sugar’s third group was one of the first to camp out nature-style down at Lake Roosevelt. It was on a bare spot that later became Camp Na-Bor-Lee. Sure, there was lots of sand, trees, and water, but that was all. The back end of the truck held all the adventurous 4-H girls that cared to go.

Night facilities included a pup tent where Sugar’s and Betty Brown’s feet stuck out, and a large survival canvas for the girls.

When Camp Na-Bor-Lee got organized, volunteer minded workers made it look like a campsite. The surrounding 4-H clubs consolidated to hold an annual four day blowout.

In the 1960s, Sugar and Betty Brown were the camp cooks. Bob Draper, the instigator of this setup, supplied all the portable equipment necessary to bring camping out of the primitive stage. I posed as the lifeguard and beach entertainment guy.

Working with 4-H kids is a satisfying experience that’s worth a guy’s time. It’s much easier than being a parent because when the kid’s outing time is over it’s up to the parents for continual daily guidance.

I probably never contributed much constructive knowledge that the kids cared to soak up. I did enjoy helping out with harmless ventures that the young folks insisted on.

Wanting to do something adventurous one summer, a group of returnees drooled to set up their club headquarters on Na-Bor-Lee’s lonely island. The idea was met with disapproval, but was never handed a complete no-no. More guts entered the young ladies’ systems when the county agent’s daughter said she would join them on their planned invasion of the island.

By pretending to have a good time with the row boat, I was able to smuggle the girls’ paraphernalia, and tent over from the mainland. The protection of nightfall helped disguise what we were up to. A shallow but cold water swim brought the girls across to their island retreat.

Sleep didn’t enter my mind that night. I kept thinking those girls would forget to wake up in time to get across for camp reveille. When daylight came, bless their hearts, they swam back before the bugle tooted its waking up camp notes.

They were allowed to keep their headquarters for the duration. It turned out to be one of the most interesting places to visit, or sunbathe before swimming back.

When afternoon play time arrived, it was fun having the boys make their own racing rafts out of drift wood. The final afternoon was when the big raft racing event took place.

The boys got to pick their favorite camp girls as co-pilots to help them navigate their rafts to victory. Or to help pick up the pieces if the raft deteriorated in the middle of the bay. Even a battery operated sound system was used so the spectators onshore could receive instant race results.

Oh sure, there was some camp sadness. A couple of youngsters developed homesickness. It’s a terrible disease. I catch it easy, if I’m over 400 miles from home. One 4-H-er, I just had to take back when he thought more of home than he did of Camp Na-Bor-Lee.

On the second day of camp life, I found my little niece, Roberta standing in a zombie like pose. She came very near caving in from homesickness. However, she was able to sweat it out when I promised to check on her folks, and see how her pet ducks were making out. Also, have her mother tell me the outcome of her favorite weekly TV episode so I could relay the story back to her.

Moving a truck load of kids back to their homes always included an afternoon stop-over at Fort Spokane, or Porcupine Bay. An extra bonus swim was then enjoyed, and the last crumbs of camp scraps were used as food.

Our final 4-H days came to an end with the dispensing of our Jolly Joggers club. For health reasons, it was something we all enjoyed. When the running craze set in, it was not necessary to keep going. There are now oceans of folks to run with. All in all, it was those 4-H days that Sugar and I will always remember. 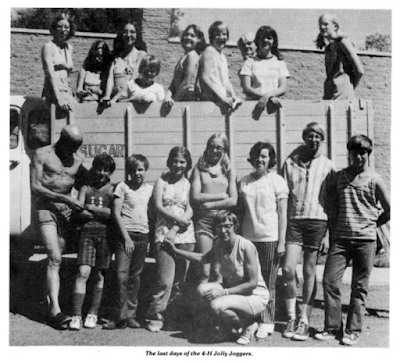 The last days of the 4-H Jolly Joggers 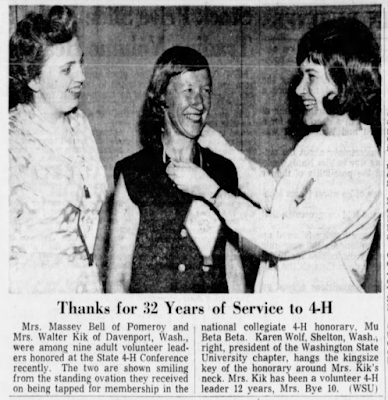 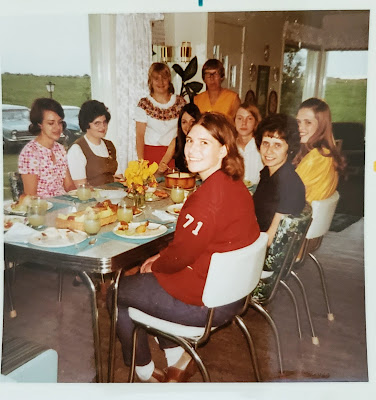 "1971 lunch at the Kik's for our 4H group. Loved Esther and Walt for being great leaders and friends." (Facebook/Sherri Grochowski) 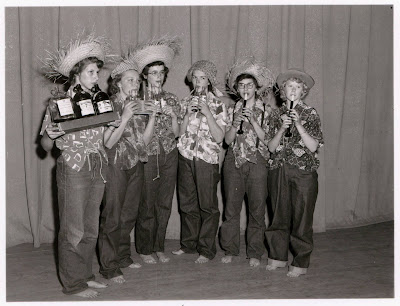