A bit of recent history reveals that it was 1977 when Bloomsday was born. That historic day, some of us dashed down from an uptown church to witness this history-making event. After the gun went off, a herd of about 1,200 runners passed the starting line in less than a minute. It was the largest crowd of bobbing runners that most of us had ever seen before. Lenn Dompier of Davenport and Walt Thorp of Odessa were the were the charter runners from Lincoln County; and they have been making Bloomsday ever since. Both are retired now and are winners in their division. It has always been a toss-up between Dompier and Thorp who would be the one looking at the other's behind.

Walt was seriously injured when an old guy, with his car, knocked him off his bicycle. It was a bad setback for the retired athelete and former Boston Marathon runner. However, he is now able to walk the Bloomsday course.

The last few years, the newspapers are full of health hints on how to run 7.5 miles. Health-minded folks are now crossing the finish line, minus the bouncing belly.

Come to think of it, we weren't designed to run much farther than six miles. There were usually were caves within that distance for our ancestors to find shelter when being chased by some pre-historic beast. Those with weaker genes got weeded out, leaving much stronger runners left that we have today.

To go the length of a Bloomsday run for an ego trip should be the limit. Running Marathons is for the birds, as it does not improve your health. In fact, some friends said they felt pooped for about three weeks after doing such a stunt. However, clipping off 26 miles in a shockingly short time does prove what a human body can do when it's fully charged up.

Now back to sensible running: All annual sponsored runs have their allure. It's where you get to meet runners from all over. Latah's Lentil Run has lots of lentils to be given away. LaCross Pre-Harvest Run is full of prizes and hospitality. Odessa's run and Deutsches Fest is a big, big deal, also. Also, Creston's Butte or Bust, Wilbur's Wild Goose Run, etc. That August afternoon run, 'Over the Dam', has the habit of making sweat pour out from our bodies.

So you see, runners have a lot of interesting places to go throughout the year--all the way from Kanisku's 'Bare Buns Run', to Twisp's 'Freeze your Buns Run' in January. It gives us runners lots of variations. 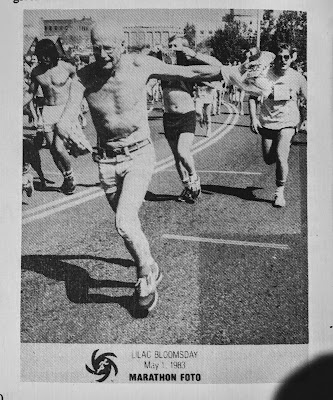 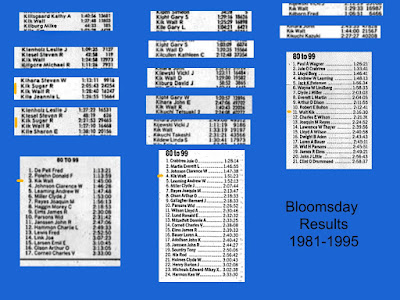 (I participated in six Bloomsdays that Walt ran
in but only saw him once, probably in 1995. - Phil K)