Reading Medina Tate’s article (1980) in the Wilbur Register made me feel sad for all the new generation farmers. Let’s hope Secretary Bergland will start working on his boss to let Russia buy all the wheat they want. That bunch will stay in Afghanistan ’til hell freezes over, even if they have to survive on K rations.

Under present conditions [low wheat prices], there can be some hope for the freshly molded farmers that are starting from scratch. Even realizing one does need modern tillage equipment, what’s the matter with swallowing a little pride, and using your mechanical ability to restore someone’s discarded tractor or combine? Yea, I know, new parts for those old wrecks can cost like all get-out.

First, before putting those restoring thoughts out of your mind, let’s take a look at some of the better healed farmers. For instance, the Mielke brothers, Carl and George. Their spread is among the bigger spreads. They do own expensive modern farm equipment, but are saving thousands of dollars by staying with large tractors of bygone days; also a combine that is a priceless relic.

The Mielkes get their used tractors from all over the Northwest. A certain amount of them are used to patch up the ones they choose to rebuild. When one of these power-giants clunk out, they are towed up close to their shop and left there ’til idle winter days roll around. Then, with the use of a lot of wrenches, these rigs are brought back into service.

George and Carl also keep alive a 31-year-old John Deere pull machine by transplanting healthy parts from a graveyard of 12 machines that are resting in peace behind George’s farmstead. These 20-foot swath monster rigs, when new, sold for only $4,200.

George is the captain and operator of this grain devourer. He seats himself on a stool between the bulk tank and the header punching wheel. In front of his stool is a series of cables running up from the tractor. He is then able to steer the “cat,” shift its gears, and other stuff that is necessary to make the operator-less tractor behave. It’s really a sight for sore eyes.

It was so well worth witnessing that Sugar and I, last harvest, hosted a charter bus load of kids, teachers, and interested parents from the Early Learning Center of the Spokane Falls Community College. We wanted them to see for themselves how a recycled machine could save operating expenses for the Mielkes, as it circled the hillside of heavy standing wheat.

This old machine, with its large railed-in deck and catwalks, was able to hold 42 of our touring group, including a blind boy and a deaf lad. Everyone had a thrill of a lifetime riding and watching this ancient harvester busily doing its thing.

Is it practical to run this antique harvester from another era? Yes, it sure is, if your farm is not scattered all over heck and back. Money is not needed to keep it in working order, and you don’t have to be an acrobat to replace worn parts. Inspection is easily done by taking a stroll around the machine.

The guided tour folks could not watch the operation of Mielke’s latest self-propel, because it was setting down in Carl’s yard with an ailing sealed bearing that was not supposed to go out. The bearing was located in such a place that it took a welding torch, sledge hammers, and nearly two days of hard work to put this $65,000 rig back in the harvest fields. 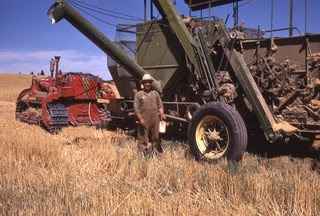 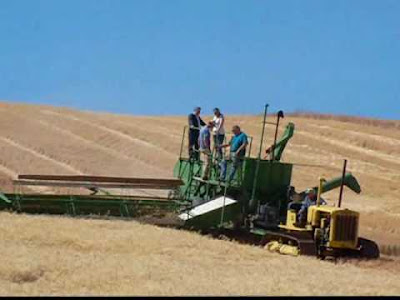