After all that excitement, facing the rest of January began looking like a empty month. Staleness set in. What made matters worse, half of the Rocklyn population had beat it to California, due to it being the first winter in a very long time without gas rationing.

It took no effort to convince Sugar and her sister Edwina to take their first long trip away from their old nesting place. Walt Wilbur released Edwina temporarily from her office job at The Times so she could sit with us and start watching the scenery go by.

Camping necessities were packed, as cabins at that time had cooking facilities. Everything was ready for that treat of heading for the southland in a new car, post war style. — A far cry from the first trip sister and I took with the folks in 1919, when it took us three weeks to get to Los Angeles in a Model T Ford.

A slight problem developed when Sugar got homesick right after leaving the kitchen door. There was some concern. Will we make it to the land of sunshine? Sugar’s strong constitution was all on her side.

Heading South was a matter of driving in that direction. Things livened up when Sugar and Edwina took an interest in watching Mt. Shasta grow bigger and bigger, and then disappear slowly to the northeast side of the car. Fun talk started to take place when I painted a glowing picture of the bright weather we would have when we got to Redding.

Instead, that northern California valley was loaded with deep fog that dam near made navigation impossible. Wanting to see our old Rocklyn neighbors, that had settled in Gridley, was a chore. Blacker fog developed before ramming into the Wallace Maurer farm. From there we were led through the fog to his folks and to the Erwin Linning’s.

The next day we happened to run out of the fog for a few minutes, and got to see land and a chunk of the ocean. Then the road quickly took us back into the fog.

The first Sunday away from home, the fog raised up but rain fell down all around us. Attending a church service that was full of strangers in San Jose was of no help when Edwina became very ill with homesickness. Missing a Sunday in the Rocklyn-Davenport area was more than she could take. We got a cabin early so Sugar could cook up an anti-depression supper. Edwina responded with no side effects, and symptoms never returned for the rest of our excursion.

The next day at Santa Maria was check up time for the new Chevy. It got it’s first 1,000 mile oil change and a grease job.  It came down the ramp with flying colors. A sticker was stuck on the door, showing when to repeat the same process. It gave a person a feeling of luxury traveling.

Santa Barbara has a well preserved mission that is about as old as the hills, so a tour was in order. Was told by a guide wearing a long black bath robe to take off my beret, as I was supposed to be standing on holy ground.

Well, we finally made it to where my sister Ethel and her kids were wintering with dad and his new wife in Corona. Cold windy, rainy and foggy weather followed us right up to dad’s doorsteps. However, we did start getting our money’s worth as soon as Chamber of Commerce weather set in. I had things planned to do. After all, Sugar and Edwina came down to sunny California for more reasons than just for that long ride.

People and cars weren’t so thick in those days, so getting around didn’t take the sap out of you like later trips did. It was no sweat getting into Knott’s Berry Farm at that time. We had chicken dinner in part of a shack that had been there years before.

Going to radio shows and watching actors seemed to be a big deal in those days before television brought all that stuff into our homes.—While in Hollywood, we stayed with the Orlin Maurer’s. Orlin went Hollywood that winter. He took up smoking cigarettes and went to the San Anita race tracks where he bet on horses that tore around the tracks. Orlin also wore high class clothes all day long.

In later life, Orlin tired of Hollywood and never went back to that winter playground. Instead, he built a new home and took up bowling in Davenport.

The most fun for the three of us was our outing to Tijuana, Mexico, and sunning ourselves on the sandy beach of Laguna, where some of my cousins lived. Also, splashing around in the ocean made me very happy.

Wes Flichtenberg checked on our house and wrote that our cats dam near froze to death, as it had been way below zero. Enough was enough, so we zig-zagged all the way home, going to places that we missed on the way down.

On January 28th, Sugar wrote in her diary, "Got home at 6:30 pm. Home Sweet Home! We are thankful for a safe and happy trip! Drove exactly 400 miles today. Cold up here, but no snow. Cats tickled to see us. Trip will leave nice memories! Carl and George Mielke stopped in on their way home from a basketball game to welcome us back." 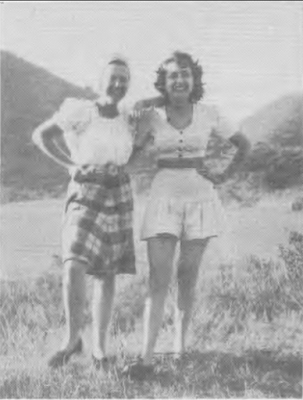