Tour Through the Silent Past

Now for a condensed version of Mindy's tour script:

"The first performance in the opera house was given by 'The Lady Minstrels,’ displaying the talents of local Harrington ladies. 375 attended the opening performance on December 16, 1904....Gas lights were used for lighting...We have moved a piece of stage scenery down here. It was made in Spokane and shipped to Harrington. As you can see it has been signed by members of a cast of a 1913 play....as well as someone from a traveling troup appearing in 1909. Hand painted on the other side are the curtains of a stage, probably used as part of the set for a vaudeville show.

“The room was heated with a pot belly stove located at the back. Notice the beautiful scenes in the alcove. The ceiling above you is a false ceiling, curved for artistic and acoustical affects...The decorative trim you see around the edge of the stage is also of plaster, but has horse hair added to give it strength.

"Most everyone in and around Harrington older than 50 will remember attending some function in the Opera House. In 1930, a New Year’s Eve Ball was held, and a new Model A Ford was given away as a raffle prize."

I would like to enlarge on Mindy’s script a bit: A prize of that magnitude during those depression days was a big deal. In order to sell scads of tickets for the ball, the Ford Roadster just had to be shown off. So Mr. Bill Hose, the owner of the local Ford garage had no other choice but to tear the Ford apart, so it could be carted up the stairway and reassembled on that old time stage. That way the New Year’s Eve dancers could drool over the shiny Roadster ‘til drawing time. It was during the brand new hour of 1931 that my cousin, Fridea Reiker, won that car. It was ironic, because her dad had a garage and car dealership in Ritzville!

I phoned Frieda and found out she hadn’t been back to this old opera house since she won that Ford. She sent me a color photo of the old poster that advertised that New Year’s event. After nearly 60 years of absence, I made it back to this building that didn’t have enough steam to keep it going.

Now back to Mindy’s tour script:

“As you can see the decorations remain from the last event held here... At times the crowds for dances had been so large that two orchestras were hired. One at the Memorial Hall and one here in the Opera House, and dancers moved back and forth between the two. Ballroom dancing with the ladies in long formal gowns was the style then.

(Then we moved to the stage area) "There were eight, 20 foot long curtains, with different hand painted scenes to be used for backdrops on the stage. They were rolled on hollow wooden tubes and stored on carts under the stage. These carts rolled in and out on wheels. We’ve set out some of the old decorations and memorabilia we found. The flag you see is from 1904 and had 45 stars. Arizona, Texas and New Mexico, as well as Alaska and Hawaii, were not yet states.

"On the stage were one toilet and two dressing rooms also a storage room....Notice the small brass gas jet for lighting on the wall in the bathroom, and the signatures of the actors and traveling companies in the dressing rooms. You can see the gas lights on stage...Here is another of the lines for the gas lights... On stage the scenery was supported by the slides you see above or by weighted pulleys that were tied off on the wall. We’ve set up some of the scenery for you. It included painted scenes like trees, small house, etc. Please notice the signatures of actors and graffiti written on the back side of the scenes. The oldest signature we found was 1906 written on the wall by the south stage door.

“Trunks and special props used by traveling companies were brought up to the opera house floor and in the double doors by means of a horse drawn pulley system. The screen you see in front of you measures 14 feet high and 24 feet wide. It was hand painted by the Spokane Scenic Studios in 1904 for the Grand Opening of the Harrington Opera House. The advertisements around the outside were from prominent businesses of the time.”

[On] the tour we took, more information was added to the script. After cleaning up and putting things away from the Centennial Tour, they decided to unroll all the backdrop scenes that could be found. They discovered one roll with the advertising that was mentioned in the old Harrington Citizen article about the grand opening.

We were given a treat when Eileen Paulson, in her trim outfit of long ago, gave a short stage performance from My Fair Lady and sang a song. We were free to ask questions— then out we had to go, so another group could make the tour through the silent past. 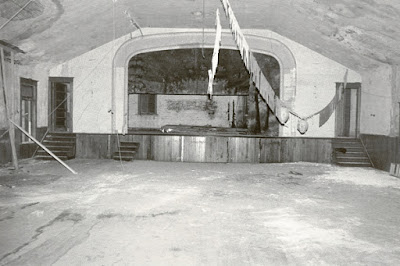 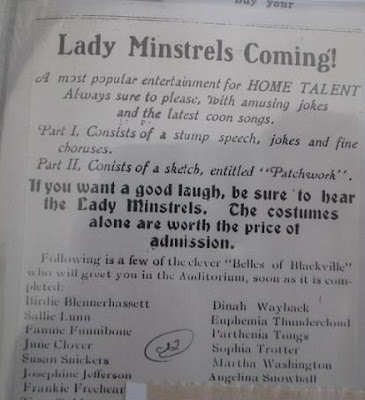