That Steamy Hunk of Smoking Steel

All the farm work that you see being done by tractors was once done by horses. Our granddaddies were forced to pound those old nags on their tails because that was the only way they knew how to develop power for farming.

Our forefathers weren’t cruel. One must remember: Where in the world could they have found tractors, when they were not invented yet? Still, there was an old timer who tried real hard to use steam power for breaking sod. But his dreams were never realized.

It was Rocklyn’s well remembered strong man, Al McMillan, who owned a large steam engine. His body size and strength put an average man to shame. With his long arms and stooped body operating that mechanical wonder, it was a sight to behold.

After many seasons of running this thrashing outfit, Big Al’s brains went to work. Dreams of plowing out his newly acquired bunchgrass laden sod without using horses entered his mind. After all, his steam engine was just setting around with nothing to do ’til the next threshing season.

Big Al’s blacksmith shop held scads of tools. It made it easy for him to build a large coal tender that fit snugly behind his self-propelled steam power plant. McMillan also replaced the drive wheels with a pair of extra wide ones that would make our tractor wheels of today look small.

That fall, McMillan got so steamed up that he ordered two carloads of coal and had it docked at the Rocklyn side tracks. His dreams of breaking out over 200 acres of sod was getting mighty close. His virgin land was located next to the farm I’m sitting on now.

But by the time Big Al’s wrenches got all the bugs ironed out, it got too late for sod breaking. That same fall, Dad sold out and we left for our extended stay in California. That ended any hope for us to witness Big Al’s horseless plows in action.

Lo and behold, when spring came, Al McMillan’s land deal was challenged by the courts, causing all that virgin land to stay virgin. But that didn’t stop Big Al’s plans to find some sod to break out. According to Herb Kruger, McMillan got a hold of some virgin ground north of Keller Ferry. Al must have said to himself, “Now I’m going to get a chance to break out some land, and finally I’ll have myself an extra farm.” It’s like Herb told me, "Al was ahead of his time."

When the count down took place to leave Rocklyn, McMillan fired up his steam monster, and started his parade to Keller Ferry. By having no load, except the coal tender, his steam outfit averaged about 20 pounds of coal per mile. Big Al did get his steam engine guided down that mountain side to Keller Ferry successfully. When he got there, he found out that the cable ferry was not designed to hold steam engines of such strength and size. Four Model T's or eight tame horses - yes, but not that steamy hunk of smoking steel.

Big Al had no choice but to start shoveling coal, and engineering the steam giant back to Rocklyn. Again his outfit started scaring the horses along the way, and covering the countryside with smoke. Since steam engines never came with overdrives, it was a monotonous job both ways.

When we moved back from California in the fall of 1927, things hadn’t worked out very well for Al McMillan. It was a cold fall day in downtown Davenport when dad ran across old Big Al. He had just gotten out of jail, and was looking for a ride out to Rocklyn. He went broke while we were gone and took up moonshining as his last enterprise. He had just finished paying his debt to society when my dad brought him home.

Big Al was a broken man when he stayed overnight with us. He was suffering from a bad case of the blues, and kept going to sleep while we were trying to visit with him.

As big and as scary as he looked, Mr. McMillan was a kind man. He and his cook raised a couple of nieces (that were orphaned) to marriageable size. One of them, Angie, married our neighbor, Ben Hall.

For years, Big Al’s mobile steam power plant and coal tender was left to rust away on the ground that is now Gene Stuckle’s farmstead. No one seems to know what happened to the mechanical wonder that tried so hard to find a chance to turn over lots of virgin ground. 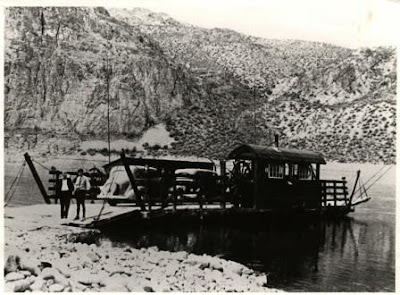 1935-The original ferry across the Columbia River. The "Keller" was a cable ferry with a motor pulling the boat along a cable that spanned the width of the river.
Keller Ferry Historical Photos / WA State Dept of Transportation
Home     Next 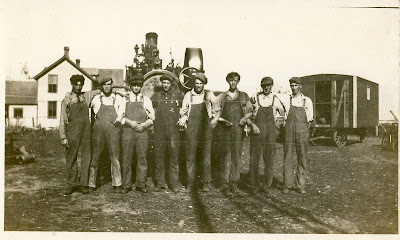 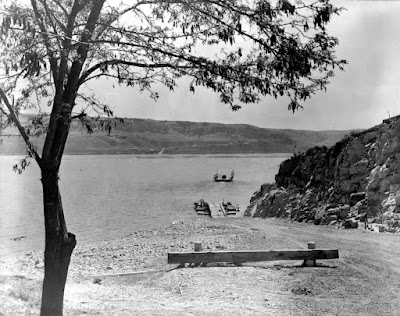