Snow...Piled On Top of the Dead

The winter of 1985 no one died that had an interest to be buried in the Rocklyn cemetery; so the road to this grave site was not plowed out. When spring failed to arrive, the county road plowers made up their minds to push the snow off of this well graded cemetery road. In the process they made snow banks taller than a four-wheel drive pickup. South Rocklyn easily won the snowfall title for that year.

Good gosh, it was March! Not even the snow that was piled on top of the dead had melted enough to indicate that spring may come some day. While sitting on the tombstone of Frieda and Ed Mielke, I couldn’t help but think back to 1934 when spring arrived the first of February. We didn’t have guts enough to put in a crop that early, so on February 17th I started to summer fallow. Orlin Maurer had over a quarter plowed before February ended.

When March came that year wild flowers were at their peak. On March 25th strips of winter wheat on the south slopes measured 22 inches high. On June 30th Paul Jahn beat me getting the first load of wheat to the warehouse. What a wild and wooly year that was. Of course, when nature leaves out winter, what can you expect? 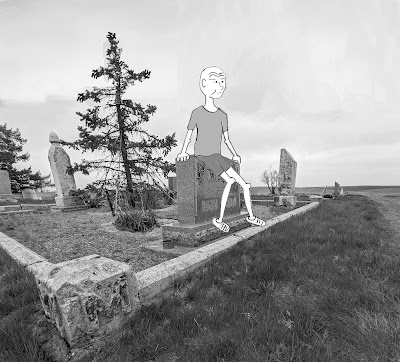 "While sitting on the tombstone of Frieda and Ed Mielke..." 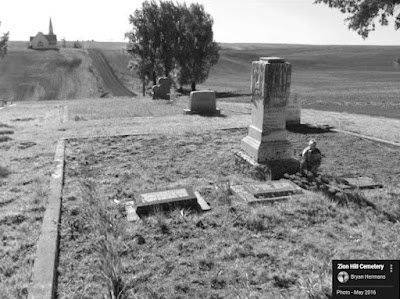