Goings-on in the Medical Field

“Life with a Killer"—so goes a title in a Bellevue newspaper. Also in a smaller headline was, "Teacher determined to defeat fatal illness to live."—It’s a story about Marlene Knapp, a Bellevue schoolteacher, who is facing an incurable disease that is slowly destroying her liver. She is the daughter of Paul and Elizabeth Clark, whom I’ve known for a long time—although, I never got acquainted with their daughters while they were growing up in Davenport.

After being examined by a specialist, Marlene learned she had a degenerative liver disease with no known cure. A while back, the doctors said she had five years to live. “I remember going home,” states Marlene, “And sitting at the table and looking at my hand, thinking it would soon be a skeleton...I was really depressed. I wasn’t that old". (47) The children of her school (sixth graders) have helped to keep her spirits up. “I love the spontaneous humor of children...I think that is one of the greatest means of support to me. I would hate to stop working,” says Marlene who had taught for 23 years at that time. She now tires very easily.

How did I become interested in Marlene? It was she that made it possible. A few years ago, Marlene was over from Bellevue visiting. She spotted me at the Harrington barbecue, and let me know she was a reader of Kik-Backs when it was appearing in the Davenport Times. We shared the same philosophy of life—so had a heck of a lot to talk about. While visiting, I had no idea that time could be starting to run out on Marlene’s life.

Marlene recently returned from San Francisco where an evaluation was made of her body. When a liver is found for Marlene that passes inspection, she has less than four hours to hoist herself in and out of the plane and get herself on the operating table at San Francisco. The Weyerhauser Lumber Company and several other private jet planes are on call for such emergencies.

Liver transplants don’t come cheap, costing up to $150,000. So far at Frisco, only 18 livers have been transplanted (1988). The surgical procedure is described as 20 times more technically difficult than a heart transplant. You’d have to walk the streets for months on end before meeting anyone using a transplanted liver. Truly it’s very rare—as such goings-on in the medical field is just in its infancy.

We first heard of Marlene’s liver plight when I received a copy of a protest letter she had planned to send to the Davenport Times. It was humorously written and to the point. But the consequences could have caused some ripples for those around town that didn’t know that Marlene is a liberated lady with strong conviction.—In Marlene’s protest letter on censorship, she quoted John S. Mill: “If all mankind minus one were of one opinion, and only one person were of the contrary opinion, mankind would be no more justified in silencing that one person, than he, if he had the power would be justified in silencing mankind.”

However, Marlene’s feisty nature of fighting for common causes is mellowed somewhat when she thinks of her family. She wrote: “Grandma May (Reinbold) was a very special lady—generous and loving. She had a gift for memorizing, and in the past few years poems she had learned as a young girl came back to her in profusion. The last time I saw her she wanted to recite ‘The Song of Hiawatha,’ I reminded her (gently I hope) that her choice was pages and pages long. She said she knew it, but recited “The Midnight Ride of Paul Revere’ instead. I regret that I was unable to visit her in the hospital to say good-bye.” Marlene also has a generous dose of Grandpa Gus’s humor in her genes.

With all due respect to good family traditional upbringing, Marlene faces the realities of life in her own strong way. Within the last month, we received a couple of letters from her—in part she states:...’’Most people are very kind, but many try to ‘take me home to Jesus.’ I know they mean well, but I know what I believe and so wish they would respect my rights.. .The two transplant surgeons are intelligent and experienced, I believe this ordeal is more difficult for Nils (her husband) and our daughter, Sidney, than for me. Oh I have my occasional down moments when I think, "why me?" Then the TV, or reading reminds me of much more horrible human sufferings and my thoughts change to ‘why not me?’ I fear only the moment of death. After that I would imagine there’s nothing—like before birth.”

"Thanks for your kind thoughts and words. They arrived on a day when I had just put my insurance and benefits material in order, and planned a memorial service (should one be needed). It would be at the East Shore Unitarian church. Anyway, after all that was done I sensed a feeling of relief, until I realized what I had done. The ‘old blues’ grabbed me for awhile, but I booted them out and today I’m sure I’ll survive it all. I’ve still got things to do and places to see...when everything is working swell, people don’t give much thought to their internal organs...If you don’t hear from me again, thank you with great sincerity for your support."

In January 1989, I received a report that Marlene stood the transplant operation OK, but on the rough side. They had to open her up again to shuffle around her intestines so they can get used to her adopted liver. Marlene turned out to be one of the fortunate ones. 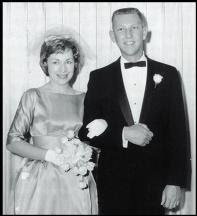