Running across a box of old letters written in 1919, I was reminded of what winter and spring was like on the Grob farm. That winter found the Kiks in California. Through a twice a month letter exchange Minnie Grob and her daughters, Esther, Edna and Naomi gave us a complete diary of what we were missing up here in our homeland.

Minnie wrote that she had heard her first meadowlark in February. Spring managed to come early that year. In fact, it made a stab at wanting to appear in January, but it got fooled when winter returned without bringing any snow, and froze out all the winter wheat.

February on the Grob farm was a busy one. Men folks were busy sharpening harrow teeth, giving all the harnesses a neat’s-foot oil bath and a repair job. Several days were set aside for emptying sacks of stored seed wheat into a hand cranked fanning mill for a good cleaning. Part of the afternoons were taken up by breaking a couple of colts that had reached adulthood, so they would pull their share of the load without fussing.

That post war type of flu came in heavy doses in those days. In January it spread like wild fire after a surprise party was given for Rocklyn mail carrier, Guy Bartett and wife. The next day, the flu knocked out Bartett, and mail was carried for three weeks by Jack Telford who was still on his feet. The flu also wiped out five children in a family of nine. (The Klosters.) [Note: Three children and a mother?, (below)]

The following week Minnie wrote, “We have finished reseeding all the winter wheat, and had lots of rain. Every seed came up, and we are all feeling a little better now about the prospects of making a living.” She also stated, “I got 30 young chicks hatched so far, and have 15 hens setting, each on a boxfull of eggs. Will set about six more clucks to-morrow, so you see it keeps me going like a whirl wind all the time. It’s been a coon’s age since I have been to Davenport.”

Edna wrote that she was walking to school that week and didn’t get home ’til 5 o’clock. She said when her goose got hungry, she made an awful lot of noise. Little sister Naomi wrote the shortest letter received. “Walter and Carl (her brothers) went to a surprise party last night. They all had to have a riddle. Here was Carl’s riddle: When the clock strikes thirteen, what time is it? It’s time to fix the clock. I think I better close.” Naomi.

In April, 20 preachers descended on Rocklyn. The district conference was held in that small Evangelical church. There were almost more preachers than members attending. Before conference, Minnie wrote that since we were gone, it left only six families to keep 20 preachers. She stated, “I promised to take four, but I don’t know where I’ll put them, maybe in the barn, or I suppose that is where I’ll land. With Emma Maurer in Pullman, we are running short handed for places to put the preachers.” Esther also wrote that we should try and make it back from California, as my mom would have a grand and glorious time cooking for the preachers.

Actually, when that big event was over, an empty feeling came over that small congregated bunch of Evangelicals. They were stewards for a lot of preachers during those busy conference days. Then suddenly the preacher population dropped to one and he only showed up every other Sunday morning when he arrived from Harrington. 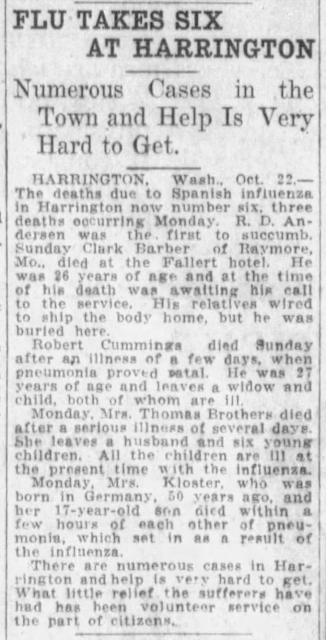 "Mrs Kloster, wife of Adrian Kloster, pioneers of the Harrington country, died as the result of influenza. A few hours after a son, Alfred, died from the same disease.  A few days after another son, Raymond, succumbed to the same disease. Mrs Miller, daughter of Mrs Kloster, came over from Sprague to assist during the illness of the family, contracted the disease and died, the four deaths occurring within six days.”  (Harrington Citizen: 11-28-1918)