Words That I Get Squeaked On

Some rough neck pioneers would take a hard look if you didn’t pay your debts, and usually would knock the soup out of you if you didn’t. If you were a big enough wheel and was able to swing your weight around, you could order meals ‘on the cuff' at the popular Columbia Hotel. For those horse and buggy travelers, it was always best to carry a gold coin or two for eating, lodging, and livery stable expenses.

All those early day Davenport restaurants boasted in ads of being close to the O.K. Livery Stables that was located on Morgan Street. This barn was known for the best accommodations in town: Large carriage space in front for parking; stable room was all shut off from drafts; Horses watered in the barn (how classy); fine rigs and saddle horses furnished night or day; drivers on hand (as chauffeurs), if wanted.

Even 30 years later, and after the Columbia Hotel was torn down, pencils and paper pads were still being used in stores. There were five grocery stores in Davenport during the 1920's, Piggly Wiggly, Burgans, Allen’s Grocery, H.H. Granger Food Supply, and the Farmer’s Store, that was run by the Campbell family. In those days, most Davenport food outlets did not let you gawk around where the staff of life was shelved.

When it came your turn to be waited on, the clerk would look over his glasses at you, with his ever-ready pad in hand and a pencil stuck behind his ear, and ask what kind of groceries you want to take home. If you said, "Three cans of corn," he would wet his pencil and write down three cans of corn and put the price down just to the right of his pencil. When you finished reading off your list to him, the clerk would walk around in different directions filling a box with your pre-dictated order. If you were not a deadbeat, you could pay for it later.

Now, magic machines are taking over what once was considered a job for an educated figurehead. No more big ledger books, pads or pencils. At Davenport’s Safeway, groceries are zapped as the check out employees slide articles across the zapping machine. All that is left to do, is to glance at a calculating window and fork over some dough.

Smart ones, with a lot of know-how, crammed 50,000 words into a microchip and put it inside our new typewriter. Now it squeaks when I misspell a word. It partly solves my terrible spelling. But I’m waiting for a typewriter that will tell me how to spell those words that I get squeaked on. 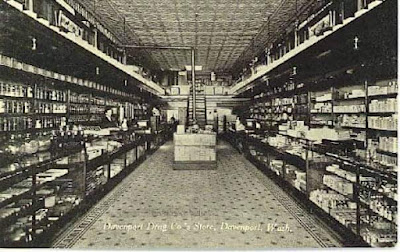 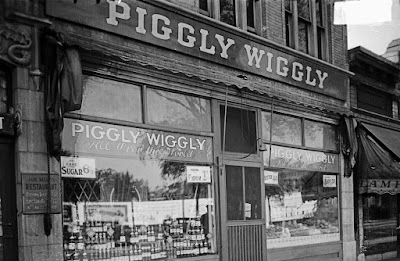