A person can learn a lot how business was run in Davenport about a century ago. That is, if you happened to go to a certain garage sale, and buy a boxfull of discarded books that probably hadn’t been read since grandpa laid down his glasses for the last time. In the bottom of this box was a 11 x 16 inch cash and credit ledger. It had every 10 sheets sewn together until 200 pages was compiled, then bound between two heavy covers. Even though this ledger is over an inch thick, it could only hold store sales and outgoing expenses from January 1, 1897, to August of that same year. All because of the detailed description of records.

It is a mystery whose Davenport pioneer business is in this book. The penmanship is of the fanciest kind. Every sales, cash or credit was recorded to the smallest monetary value that my eyes have ever seen. Judge Neal and Fred Baskie had charge accounts that went as low as 15 cents. Rev. Walker must have been a big spender. Nearly every day he charged things at this place that ran from 5 cents to 35 cents. The smallest outflow of cash was on January 2, 1897, when 5 cents was paid after a cash deal for eggs was completed. Due to bad bookkeeping, it didn’t state whether it was for a single egg or a dozen. Later in the spring, 20 cents was paid out for eggs, but again, the amount and size of the eggs was missing.

In April, attorney fees for collecting a bad account came to a dollar. It cost Dr. Whitney 25 cents to get his pants repaired and altered. Big shots of that era like, J.W. Fry, E.J. McKee, C. Buck Jr., Moore Talkington, Spinning, etc., ran up bills that went into the double digit figures. The Columbia Hotel was this establishment’s best weekly customer. Bills ran from 10 cents to $27.50. The store also took in Davenport’s school district warrants and turned them into credits. A lot of business was done with the Davenport Brick Yard. Other buying power was handled through the Spokane Dry Goods, Spokane Soap Works, and the Wood Manufacturing Company.

Daily cash sales ran only from $12.15 to $32.55. Credit cards weren’t invented in those days, yet charging things was very popular in that ‘gay nineties’ era, and was a three-to-one favorite. 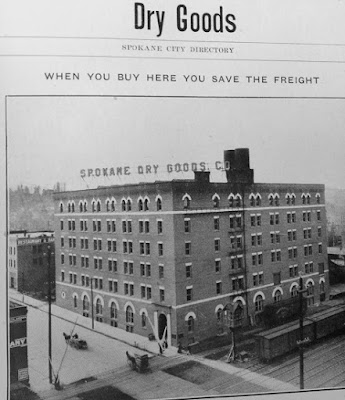