In a way, I never matured gracefully like other farmers did. This mental quirk gave me the excuse to play or take up hobbies that my farming friends wouldn't fool with. For instance, like getting the first load of wheat to the warehouse. In 40 years of my half-century of wheat farming, I did just that most of the time.

This hobby started when I found myself blessed with some of the best thin ground in Lincoln County. This skimpy layer of pre-Saint Helens' volcanic ash made it possible for the moisture to depart early, causing the wheat to be shocked into sudden maturity. So you see, part of my farm was "made to order" for early crop delivery.

The maiden voyage of trying to get the first load of wheat to town was no bed of roses. The day was a scorcher. The excitement of getting into the standing wheat left no room in our minds to stock the combine with essentials like plain ordinary drinking water.

The combine finally produced a truck-load of wheat a mile from home. The sight of the turning windmill in the distance added pain to my thirst, but the so-called first load had to be taken in without any delayed detours.

Upon pulling up to the warehouse scale, I was told that a guy from Sand Flats (where it was too dry to grow mustard) beat me in and took home the company's first prize - a large sack of flour. However, the second prize was two quarts of beer.

I never drank such stuff before, but there was no time to quibble. It felt so wet in my dry mouth. Soon a screwy feeling went across my shoulder blades, and I felt a strong desire to sit down.

I was taken on a guided tour to the downtown restaurant, where potatoes and other stuff diluted the beer. This made it possible to make it back to the combine and start the harvest season off in a normal manner. 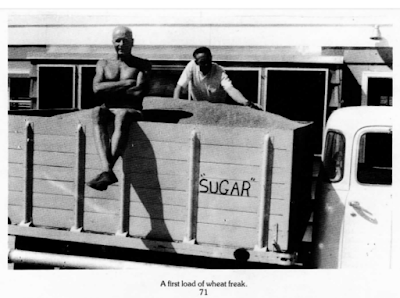 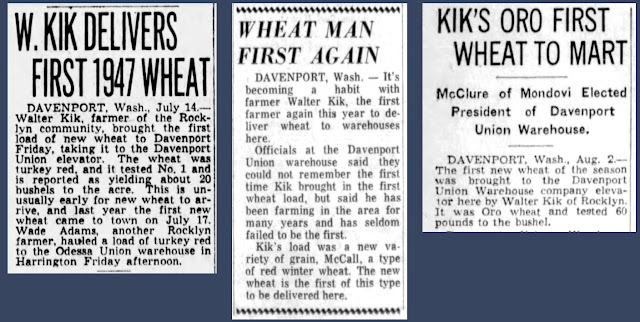