It’s neat to have political elections every once in a while. It stimulates the mind when local candidates come up to talk to you. Half of them make you feel funny when you know deep inside that you are not going to vote for them.

One time Sugar fell for a nice guy that was running for a local job. At about the same time, I met and liked his opponent. It doesn’t make sense going our separate ways voting for these two, as we would be canceling each other out. What to do? I had ’til that Tuesday to decide whether Sugar’s reasons come first, or party loyalty.

It was too bad that this Creston steam plant issue caused so much emotional steam. Inflammable debates ran rampant. I’m a nut about good environment, but you have to have proven evidence that fumes from tall chimneys will [not] hurt precious plants and other living things.

In 1916 there were no steam plant projects to get excited over. In those days, Republican presidents were treating everyone pretty good. If it weren’t for Henry Kuch, the Democrats would have become extinct out here at Rocklyn.

Teddy Roosevelt had made people happy with his manic, free-swinging style of running the country. Big fat Taft was a harmless and likeable president. The only reason Democrat Wilson made the grade in 1912 was that the Republican party became split. Teddy ran on the Bull Moose ticket. That caused Taft to get too few votes. Wilson was then able to enter the White House.

Four years later, Wilson had a scare when he ran against Charles Hughes. Election night Charles went to bed thinking he was President. But the next day, California sneaked Wilson back into the oval room. 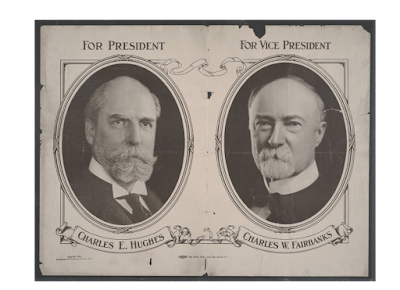