If It Hurts, You Don't Pay

Writing up this Harrington story, reminded me of the time I was living at Orange, California, and how terribly homesick I got for Harrington and the farm where I grew up.

That sickness hit me while I was attending a matinee in 1923. The silent screen flashed on the Pathe news, and soon the lettering spelled out Harrington, Wash, (believe it or not). Then a flickering picture appeared showing a whole string of mules pulling a large combine, followed by a scene of Harrington that was loaded with more strings of mules prancing down main street. The event was called “Mule Day.”

I swore when the day came for me to escape my bondage from the south, I would attend that exciting event. When my goal was accomplished, Mule Day had been phased out, so I had to wait for the first big pow-wow that Harrington sponsored. It was called Farmer’s Day, or something like that. Mules were replaced with prizes, friendly people, and Dr. Cowan, who put on a free tooth pulling show.

In the middle of that day, good old David Cowan drove his made-over touring car to a corner on main street and parked the rig. He had a shed-like thing built on the back. He opened the doors and rolled out a dentist’s chair on his ready made platform.

This clever guy was quite a salesman. His gimmick included a pair of pliers, a fast talking voice and a bottle of pain killer. He introduced himself by shouting about the specially trained tooth pullers he had in Spokane. His slogan was. “If it hurts, you don’t pay."

Upon asking for volunteers. Herman Bursch from Rocklyn said he had three teeth in his mouth that weren’t worth a damn. “Fine,” said Cowan, “jump up here, it won’t cost you a dime.” The doc put his fist in Herman’s mouth in such a way he didn't even feel the needle.

By the time Doc Cowan finished his commercial, farmer Bursch’s jaw had long since turned into a rock. It was rather amusing how the Doc held tooth number one up in the air, giving a speech to the Harrington crowd, then asking Mr. Bursch if it hurt. The bloody scene was repeated for tooth number two and number three.

It impressed me that day to the point of letting the Peerless dentist pull my first adult tooth. It was painless alright, but it made me feel screwy. Since then I’ve had a fistfull of teeth pulled without dope. It’s only about an eight-second trip through hell, but then it’s all over, and I don’t feel screwy. 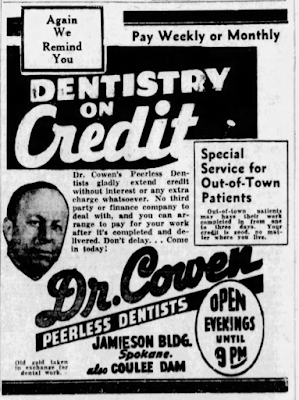 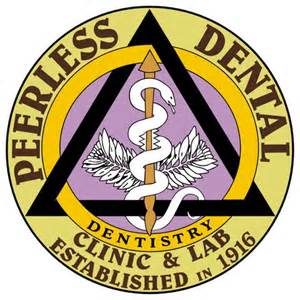