Get His Brain Changed Over

An early day author of a novel and a Hollywood movie company were in our local territory at separate times years ago. They did a good job of using our natural scenery, but rather hectic stories emerged from their portrayal of our sacred wheat country, that we all learned to love so dearly.

When I was a dreamy kid, I was forced to spend some of my choice teenage years in California. To relieve my torture, Lady Luck handed me Zane Grey’s novel, “The Desert of Wheat". It was concocted right after World War One. Zane spent part of a summer around the Almira-Hartline area, where he stimulated his imagination enough to create this special yarn.

Homesickness would set in when I read his description of those long sloping summer-fallowed fields south of Almira, where horses and their loads of drag-weeders were making dust that would hang in long ribbons across the fields in the evenings around about quitting time. Obsession would set in when Grey described how the summer breeze would make acres and acres of wheat wave. The chapter gathered a lot of thumb marks.

The IWW (International Workmen of the World), a rather nutty labor group, was raising hell in those days. They got into Zane Grey’s “Desert of Wheat” novel. He had these destructive characters burning wheat fields, and things like that all over the Big Bend country.

In real life, stories got out that down in the Palouse Country the IWW’s were tossing lots of matches on top of wheat stacks (settings). Later when the “hoe-downers” fed the mixture of unthreshed grain and matches into the speeding cylinder, a destructive fire would set in. Later the Palouse farmers found out that they were just growing too much smut*. A striking cylinder tooth would explode the excessive smut, giving the same effects that the IWW’s were accused of.

Many years later, when World War Two got itself over with, a movie company from Hollywood decended on the Connell-Lind district. Seeing all that wheat waving in the wind, they hurriedly unloaded their cameras and rounded up all the Massey-Harris self-propelled combines they could lay their hands on.

“Oh goody," a bunch of us guys said to ourselves; a harvest story made in the northwest, using the same self-propels that a lot of us early buyers experimented with. The movie was called, “Wild Harvest”, starring Dorothy Lamour and Alan Ladd. Our thoughts ran illusive. Maybe we could learn how to harvest Hollywood style.

When “Wild Harvest” came to Spokane, Sugar and I made it a foursome by taking Sugar’s sister and future brother-in-law. George wasn’t sold on self-propels at that time, so I thought this movie would be an excellent opportunity to get his brain changed over to accepting advance harvesting methods.

When the popcorn sacks were half empty, it was apparent that this picture would not walk off with any Oscars. The only realistic scene that struck home, was the harvest crew eating their noonday lunch under the shade of the combines. A tired and bored housewife did kick up her heels and began horsing around with the harvest crew, causing stress to set in on the movie viewing farmers that took their spouses for granted.

In no time, the wild stuff began making wild things happen in “Wild Harvest.” Combines were being pushed off of speeding trucks, with the idea of slowing down a rival harvest gang that was muscling in on their harvest brigade operations. Young Mielke went to sleep on his fiance’s shoulder. It just wasn’t the right “picture show” to convince George that he should change over to self-propelled combines.

*Loose smut is a seedborne disease that is caused by the fungus Ustilago tritici. (Link) 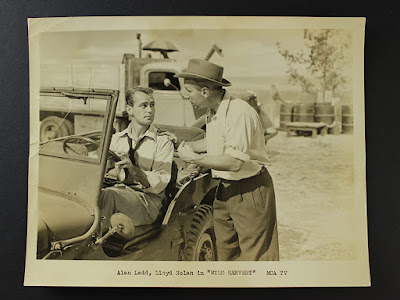