Fuel for the Superstitous Ones

The following week, while visiting casual like with a young reader of the Times, he asked, “How come you didn’t ask more than $15 an acre for that land you wrote about. Did someone put a curse on those acres?” then he added a happy, “Haw haw.”

In fact, he could be right, that is, if you are a believer in curses. The land’s history does supply fuel for the superstitious ones. Everytime this land was sold, buyers didn’t keep it very long, and the owners would get it back.

This questionable 100 acres was part of a 480 acre put-together farm. It was the only squared up piece of farmable land in this body of volcanic disarray. The rest of the space consists of rocks, and jig-saw patches of soil.

For centuries this land didn’t do anything but grow bunchgrass and rock roses. Meanwhile, back in Wisconsin, two half brothers, Homer Jones and Bill Nelson, married two sisters, Ruby and Mary. These two couples wanted to start married life way out here in Lincoln county, so they headed for Rocklyn.

Jones and Nelson corresponded with three lazy homesteaders, who only broke enough ground to grow potatoes. One of them owned this 100 acres. They all wanted to sell out to anyone that would slip them the right amount of money.

The Joneses and Nelsons complied. When the summer of 1909 arrived, they built themselves a rather cozy love nest. A dining room and kitchen downstairs and two bedrooms upstairs. That way the two couples didn’t have to go very far to visit with each other.

These adventurous couples brought with them the desire to start up a dairy herd of cows. So they sent to Wisconsin for the grass seed of their choice, and planted the stuff discriminately on this 100 acres, as well as the adjoining pot holes. But the grass seed was loaded with quack grass. The next year, the grass took on a sickly look, and the quack grass stayed healthy.

Soon the two sisters got homesick for Wisconsin, and their husbands got sick looking at all that quack grass. In those days, there was no knowledge on how to get rid of quack grass, except pray for a seven year drought.

So Jones and Nelson rounded up a retired minister, Rev. Hawks, who took the farm off their hands temporarily. But they sold their put-together farm as having grade one wheat land on it. When preacher Hawks saw the growing wheat drying up on the thin spots, and the rest of the crop being choked out by that evil quack grass, he sued for his money back.

To help the Wisconsin bound folks out, neighbor Bill Chappell testified that the 100 acres in particular was number one land and the quack grass would disappear if they seeded wheat every year. The jury saw different, so the Reverend got his saved-up preaching dough back.

Anxious to get back to Wisconsin, the Joneses and the Nelsons gave bachelor Frank Marcellus a crack at the land at much reduced payments. Frank wore out his mules before he could wear out the quack grass. So he dumped the place back to Jones and Nelson, who by now were making it big back in Wisconsin.

The cycle selling of this place was now left to realtor Frazier. He found Ben Hall, who didn’t have a farm. Ben didn’t mind taking a stab at the land, with dreams of getting rid of the quack grass by plowing it in August. Not realizing that most of those acres were sub-irrigated, he too was forced to dump the farm back to the Wisconsinites.

It was beginning to look like the land was jinxed, but that didn’t stop Fred Magin from trying to see if he could handle the place. But bad farming luck hit poor Fred right in the face. It forced him to throw the sales contract into the heating stove.

Jones and Nelson were getting frantic. For all those years, their eastern Washington farm kept tumbling back in their laps. It got to a point where in 1933 they wrote dad and I, stating in so many words that we could have all those lake holes, the pretty weather beaten rocks, and all the places that grew lovely wild flowers as a gift, if we would please give them $15 an acre for what is farm land. Nothing down, no interest, just half the yearly crop as payment.

Deals like that usually work. Sometimes it takes landowners that long to learn how to sell a farm permanently. I never did figure out why I sold the choice part of that farm for the same price I gave for it. I was never given any credit for trying to stop inflation.

With all it’s trials and tribulations, this once quack grass laden field has now found a permanent owner. It’s starting to grow lots of 50-bushel-an-acre wheat. Truthfully, it did bug me a little when the new owner found a simple way to get rid of quack grass. 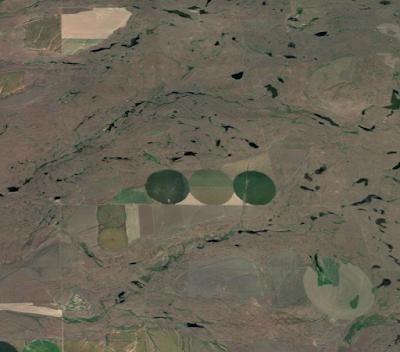 "It was the only squared up piece of farmable land in this body of volcanic disarray." 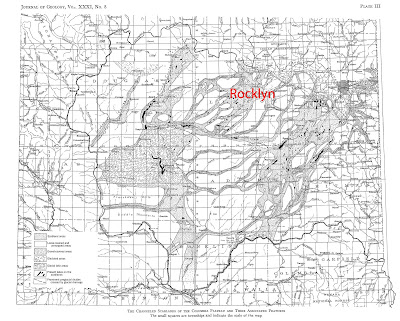 J Harlan Bretz's Discovery of  the Origin of the Channeled Scablands
WashingtonStateGeology.Wordpress.com