A Noisy Bugger to Ride In

In the years of 1930 and '31, an air passenger route was laid out. Those old planes flew low over Davenport, Rocklyn, south of Wilbur, Coulee City, etc. as they winged their way to Seattle. A landing stop was in order just before the plane flung itself over the Cascades.

During the Hoover administration there were no appropriations handed out for emergency landing fields, so expenses were kept down to bare bones. Emergency landing strips were mapped out about every 40 miles. A guy with a car would stop in at a farmer’s place and ask if he could use a certain stubble field for such landings. When permission was granted, the flying company’s representative would angle his car and bounce across the field, stopping to pick up rocks that could be a threat to landing wheels. He then would sight across the field with his naked eyes and place red flags on each end of the instant-made emergency runway.

By the Rocklyn corner, Fred Magin’s stubble field was laid out in such a fashion. These landing fields were on the portable side. Farmers’ summer fallow system caused that.

Except for being in an overhauled condition, this early day airline used the same make of planes the barnstormers used, the tri-motor Ford. Even though times were tough in those days, the Tin Goose usually was loaded to the brim with 16 passengers. No cocktails were served, so everybody had to wait nervously ’til their destination was reached. Lunch was served from what you put in your overcoat pocket before you left home.

Those corrugated sheets of thin metal made the “Tin Goose” a noisy bugger to ride in. However, for sitting purposes the plane had comfortable wicker chairs and a washroom that must have held a porta-potty.

The next morning the Tin Goose headed back to Spokane, where it found a lot of thick fog down close to the earth. The guy that was flying this rig got tired of waiting for the fog to go away, so he decided to plow through it. But he plowed the plane too deep, causing the Tin Goose to crumble and roll up into a pile. Two passengers lived by bouncing clear of the wreckage and were able to tell how the pilot took a chance and learned it was the wrong thing to do. 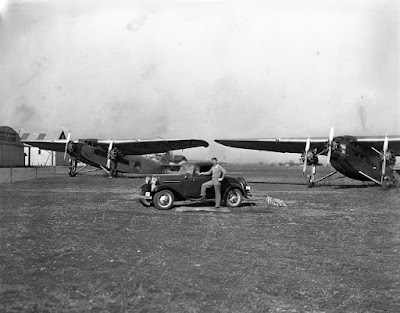 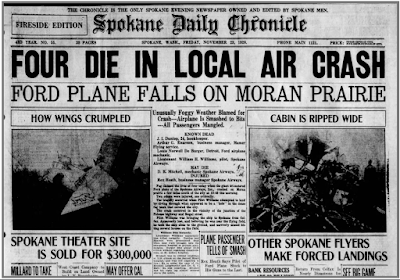 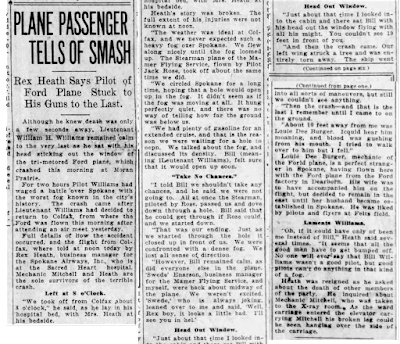 Aviation History: Ford Tri-Motors
Spokane Airways, Inc. and Mamer Flying Service, both located in Spokane, were the first providers of air transportation service starting in 1928 from Chicago and Minneapolis to Spokane and from Spokane and other Northwest cities such as Portland, Seattle and Pasco. To provide passenger and cargo hauling service three Ford Tri-Motor aircraft were purchased for service out of Spokane. One crashed within days. A second crashed about 5 years later. The third one amazingly still flies and it is valued at over $1 Million. It is one of the oldest airline plane still capable of flying. GeoCaching.com