He Wouldn't Harm a Fly

[In] February 1978, along with other folks, I attended a court case that starred a Rocklyn citizen. While waiting for the judge to make a very important decision, I couldn’t help but think that in this same courtroom, years ago, another Rocklynite was involved in a court trial.

Old Gus Kruger, a big soft spoken man and cattle rancher by trade, was a bachelor who behaved himself except for a small thirst for whiskey. Gus did, however, get caught in a trap set by a married couple who had larceny in their hearts.

Needing ranch help, Kruger hired these two crooks. When Gus terminated their employment, crook number one said she wished they could stay at Gus’ ranch. Crook number two said, “That’s it!” and beat it to Davenport to file an 'alienation of affections' suit for a pile of money.

I knew old Gus. He wouldn’t harm a fly, let alone swipe someone’s wife. Like a lot of trials, evidence sometimes just hangs on one shaky point. This point happened to involve an outdoor cellar. (Sounds scandalous, doesn’t it?)

Scene—courtroom, loaded with nosey spectators. A lawyer, pointing his finger at Gus, roared, “In his arms this scoundrel was seen carrying this man’s wife up from the cellar.” Gus told the court she was supposed to have turned her ankle while down there fetching some milk for dinner.

The jury didn’t see any reason why Gus and his money should part. Also, it figured he was within his legal rights to perform this so-called mercy chore of rescuing crook number one from that cellar. Gus, puzzled, but none the poorer, went back to his ranch where he could once again watch his cattle roam. 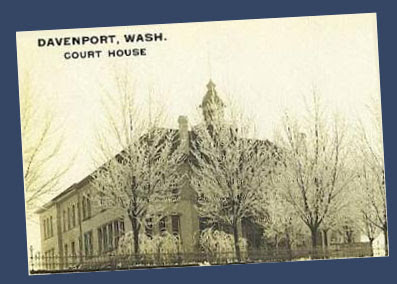