They Were All Christened "Harrington"

It is factual that Wilbur is a great little place. The controversial Wild Goose Bill just added the needed color to get it started. Later, this town was able to furnish the right inspiration for an early day citizen to become governor. The city of Wilbur has since stayed solidly on the map, without shrinking very much.

That can’t be said about Harrington. Its local newspaper folded up years ago, and the highway has long since ducked out of Main Street. Still, Harrington wins by a hair as being the most interesting early-day boom town in Lincoln County.

Years before fossil fuel was needed, a lot of mules were carted up from Missouri to the Harrington district for horse-power usage. Later, this pioneer town became the mule capitol of the west, and held annual Mule Day celebrations. In 1923, Pathe News flickered this annual event in lots of movie houses.

A monument about twice the size of a tombstone should be placed at the Harrington entrance, just far enough off highway 28, so the snow plows wouldn’t dent it. A suggested inscription should read as follows:

“One block east and one block south of this monument, sets the remains of an early pioneer factory. When the 20th century was hardly 15 years old, two daring guys, Lew Dunning and Charlie Erich, strayed into this humble burg from California.
"They figured this frontier community deserved a harvester that would be precisely designed to fit the rolling, volcanic hills of Lincoln County. They sold stock and got farmers excited enough to invest. Lots of lumber and iron were shipped in, and soon this factory gave birth to lots and lots of harvesters. They were all christened "Harrington." Later this factory even molded and assembled its own combine motors.
"These part wooden and iron machines soon graced the wheat fields for miles around, causing inferior imports from California to slow down to a trickle.
"Straight outdated chain hitches to pull these rigs were very cruel to all mules. Two local inventors, Talkington and Green, got busy and made hitches of their own design, so the new harvesters could be pulled without causing the animals to rupture. A third humane inventor, Shendonie, brought his own hitch with him from California. As many as 32 mules could be hooked together for pulling purposes."


“This monument was put up by the local Historical Society for the Prevention of Lost Records.”
(continued) 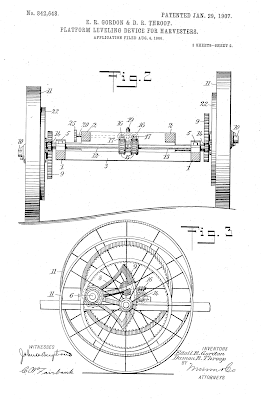 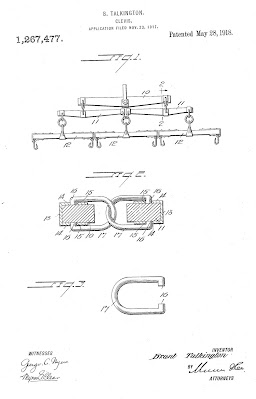