Back to Where I Belonged

August 30, 1927 was a day I’ll never forget. We were all ready to abort our California ranch for the migration back to Washington. Our furniture was shipped ahead days before. The three-tube radio was packed carefully in one of Mom’s large dresser drawers. My stripped down Model T and the folks’ Essex were pointed north for some picture taking.
Soon a trail of dust was left behind, as sister and I took the lead down the road that eventually lead us back to our Washington farm.
It took 10 days to make it up to about the Washington State line. We made a big deal out of surprising a lot of relatives on our way up to Hermiston. From there to Walla Walla would be another nest of related people to see. Any more visiting at that critical time was out for me. I was too close to the farm that I had been longing for so long to plant my feet on. After sister found room in the folks’ overloaded Essex, I beat it across the border, and was delayed only by the limited output of the Model T in getting back to where I belonged.
Excitement ran high inside my body. Before the folks got here, I was able to put kalsomine on the walls of the main rooms. Got some furniture unpacked and put where I figured mom wanted it. The Crosley radio was placed in a good listening area. Even had time to string up antenna wire that reached from the blacksmith shop to the house before the folks’ car arrived in the yard.
It was a surprise to find out that the early day radio stations up here had established a service for the farmers. While seeding winter wheat that fall, it was neat walking into the house at supper time, and listening over the radio whether wheat was a decent price or not. Also the weather forecast was given by the best methods they had in those days.
It wasn’t long before I sent to Chicago for a super powered eight tube radio kit. When I screwed it all down on a long board it really looked massive and impressive. A front panel held three large tuning rigs with their dials. A couple of double action volume controls that were at arms length apart. Also some unnecessary gismos like a glass tube that would glow in a flash-like fashion if lightning got pretty close.The ’build it yourself radio’ was really a table model monster that would have overpowered any living room. I gave it to neighbor Wood Hulburt, so he could watch the working wonders of radio as he listened to what ever he wanted to listen to.
As time passed, programs through telephone hook-ups got better. Many of the weekly aired shows are now classics. Early local talent on a weekly base was Davenport’s Tumbling Tumble Weeds’ Boyk sisters. They sang western songs that pleased the Northwest.
During this period, radio sets were coming off the assembly line with multiple tubes and cabinets as big as some TV consoles, minus the picture tube. To run these sets it took a couple of heavy duty six volt wet batteries. One was needed to light up the tubes while the other battery would be in town getting a charge of electricity. Also needed to operate those radios were two sets of 45 volt dry cell batteries, and a small package of C batteries. It was a portable power plant all its own, making it possible for radio to reach out into space to bring in all that music, and audio events.
Before the war years, it was interesting how false advertising was used over the air. To sell a certain brand of radio, the announcer would state to this effect, “Be sure and buy this radio, it has a five year in advance plug-in for television.” The illusion given was when television arrived, you just placed the picture tube on top of the radio and plugged it in.
"Growing Years of Radio and TV" Kik-Back Country, page 67 (home)     (thread) 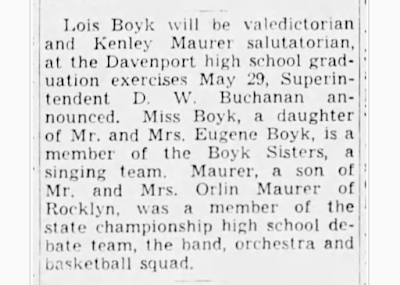 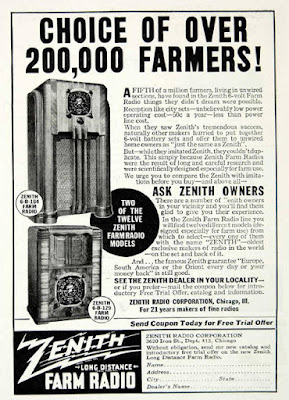