A Schemer, A Womanizer, and a Hypocrite.

I’ve been thinking back to those seven years that I had to spend in southern California. In the 1920s that part of the country wasn’t as overloaded as it is now. The air was still air down there then, and people weren’t so thick. Orange orchards had not been yanked out to make room for freeways and monotonous rows of houses. In those pre-Oral Roberts days, Aimee Semple McPherson and her Angelus Temple were busy ruling the roost, ’til she used up all her magic charms.
Before Aimee was arrested, and before her sensational kidnapping trial, it was a big deal to drive over to the Angelus Temple with relatives that were ‘gung-ho’ on Aimee McPherson. The temple did make you feel like you were in heaven. Blue sky, with lots of clouds, were painted on the huge ceiling. Also, angels were artfully painted as floating around in various places. When the band stopped banging away, Aimee in a white robe would make her grand entrance by descending down an open staircase that led to her throne-like pulpit. But it got to be kinda boring watching Aimee heal the stuttering, the deaf ones, and untangle a few contortionists.
When Aimee was at the height of her glory, my dad’s brother-in-law, Emil Bell, and family were living in Hermiston, Oregon. He thought he was designed to be an evangelist. The bleak sagebrush hills of Hermiston caused Emil to think of a better place to start his mission of salvation. So he dumped my aunt and their two children permanently, and left for the fertile evangelistic soils of southern California. On his way, he picked up a tuneful singer who worked as a ‘starter’ just before Emil began his arm swinging sermons.
Of all things! When Emil got to Los Angeles, he thought he could get a job working for Aimee McPherson as some sort of come-on preacher that could help herd the stray ones into the Angelus Temple.
When Emil Bell realized he had to start from the bottom of that highly competitive evangelistic ladder, he parked himself at our place. After cussing the world out in general for being so wicked, Emil opened up a shop downtown, and held some revival meetings.
It was luck that my dad’s brother-in-law got starved out, and left for other towns where picking was easier. There were just too many German Lutherans at Orange, and they gave him a rough time. Emil was a schemer, a womanizer, and a hypocrite.
"An Undesirable Relative", Kik-Back Country, page 59, part 1 (continued)     (home) 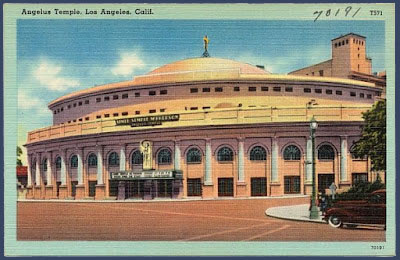 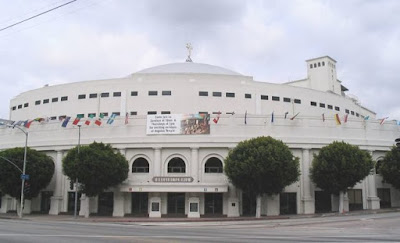