Speaking of these early day harvesters, a recent finding just outside of Harrington, on the road to Lord’s Valley, there on an old California land company farm, a pioneer ranch house floor was yanked out for replacement by Herb Armstrong. There, before his very eyes were ancient combine tracks imprinted during the harvest of 1893. All the indentations of the bull-wheel cleats that ran the ground-powered harvester were clearly visible.

How did these original tracks stay preserved for all these eons? Simple: Right after harvest, eighty-eight years ago, that ranch house was put together on that stubble field using rocks from the pasture and homemade mortar for the outside foundation, sealing in perfectly this little tidbit of history.

Harringtonites did use their noodles during those tough years when the Roosevelt administration was handing out dough quite freely on W.P.A. projects. They chose to have a swimming pool made with a building over it, and had it attached to their school. It still keeps kids and adults happy.

What did Davenport do with it’s W.P.A. allotment? They had a golf course built on a pile of scab rock. The course was never a success. Between the sagebrush and rocks, squirrels got busy and made lots of extra holes, causing great confusion and frustration among the golfers. Davenport was so embarrassed, it was glad when a much-needed hospital was built, as it helped cover up part of the folly. 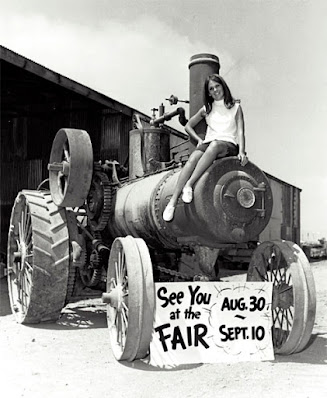 "...the indentations of the bull-wheel cleats" 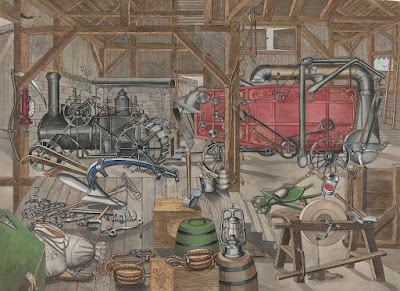