The Neighbors Played it Cool

After the war it was rumored that soon television would arrive, but it took ’til 1950 before it got to Spokane. Like a nut, I sent to Seattle for a console TV set and had it sitting in the living room for three months before a test pattern was ever sent out in our direction. Guess I just wanted to be ready.
The neighbors played it cool and didn’t start buying TV sets that winter. But they did want to see what was going on inside the picture tube. We had two steady sets of neighbors making it here for their favorite weekly TV shows.
The Monday nighters came to watch wrestlers slam each other around. With a little fantasy instead of reality, that group got entertained to their satisfaction. The Wednesday nighters came to see Groucho Marx “Bet Your Life” and usually stayed ’til TV went off the air. For Sugar and me that winter turned into a local social event. Sugar made and served so darn many cookies that I had the beginnings of a lump in front of my stomach.
When neighbors started buying their own television sets, I took a quick course in TV repair and bought meters and lots of other fix-em stuff. But after years of bringing dead TV sets back to life in the surrounding country side, it got to be old stuff. Now days with remote control, solid state, trouble free TVs, it’s time for me to just sit back and enjoy these electronic marvels. Ever since the crystal set days, my love affair with radio and TV may explain why I have a TV set in every room except the bathroom, and that’s because it’s just used mostly during the commercials.
"Growing Years Of Radio And TV" Kik-Back Country, page 67 (home)     (thread) 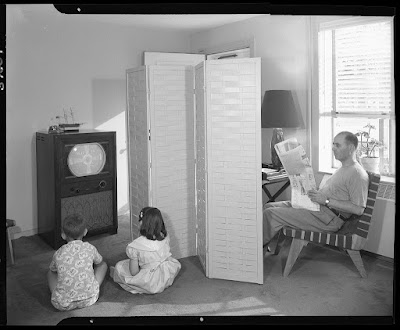 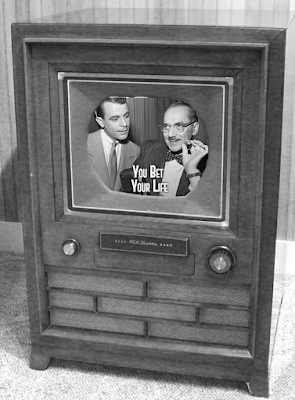