Sawed Up to Your Specification

An enterprise entered our community at that time, when Clark Green built a saw mill. It was located within the city limits of Davenport. For added income, Clark set up a chop mill and a grinder that turned out the best whole wheat flour around here, that is if you didn’t mind a little chaff as added fiber. Clark’s rig was also able to make chaffless white flour by a special sifting process that was unique for its day. Your own wheat was ground and a small percentage was held out as payment. —The Green set up kept most of us supplied with what we could afford during those skimpy years.
Clark came from a long line of Greens. His aging father, Willis Sr. was his helper and general manager. Between Clark’s work load, he would lug up some logs from the canyon. Telephone orders were filled from stock on hand, or sawed up to your specification. It was a neat service, if you were ready to nail down the green lumber before it warped into funny angles. Of course, in those days, only a few of us could afford fancy dried lumber, anyway.
When our old barn started caving in, I needed a couple of replacement sheds. By borrowing $200 from the bank, I was able to head for Davenport’s first and only saw mill. Clark had the dimensional lumber, but no foot boards. After loading his mouth with chewing tobacco, Clark was ready to start the buzz saw. Soon boards were coming out with plenty of thickness.
While waiting for my second load of lumber to get cut up, I went into the office, and started visiting with Clark’s dad who was in his early 90’s and was aiming for the century mark. Free of the responsibilities of raising a family, Willis Sr. wanted to help out one of his seasoned sons.
Willis had a unique arithmetic way of figuring with numbers, but our total came out the same. Seems like great-grandpa Willis didn’t learn all the tough parts of the multiplication tables at school, so he developed his own style.—This brief encounter with arithmetic brought out his strong remembrance of his school days that were spent in a log school back in Iowa. He remembered well how he stored his slate in a dug out shelf between the logs above his desk.
"Things Were Different in the 1930's" Kik-Backs No. 3, page 23, part 2 (continued)     (home)      (previous) 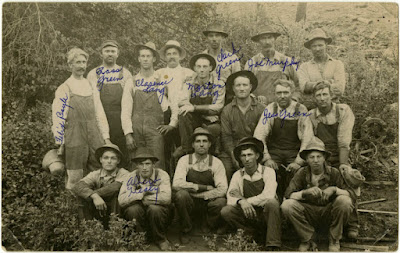