There always were pros and cons for any advanced technology that tries to locate itself in an established community. Some people accept new expansions, while others want to keep the status quo. I imagine there were the same objections to the Kennedy space launching pad that was built in Florida. Space scientists wanted a launching pad there, maybe because that spot was designed by nature not to sink during blast off. Sure, some houses were moved, and maybe a palm tree or two had to be transplanted elsewhere.

Things were quite different in Lincoln County in the 1930's. Everyone looked forward for any expansion that the State or Federal cared to do - such as widening the State Highway. Those extra bucks the highway department spent, kept our bank account from becoming empty. Mom and sister Ethel fed the road construction crew, making it possible for them to buy a brand new Sears washing machine that had a built in gasoline motor and a foot pedal to start it up with.

Since there were no big projects begging to settle in Lincoln County, we had to depend on a little shrewdness of our own to survive. When wheat was selling from 30 to 50 cents a bushel, I was lucky to find a special marketing place for some of my wheat. It worked as a substitute ‘til the first Triple-A* farm program came on the scene.

Ham Thomas retired from his farm south of Davenport and went into the chicken slaughterhouse business. I had a verbal contract to supply all the wheat his chickens could eat before they were done in and made into fryers. --My Model T Ford held five sacks of wheat. Ham paid me a dollar a sack, which figured out to be 5¢ a bushel above the going market price. By getting my empty sacks back, another 10¢ a sack was added to my slim profit. A big deal in those days! 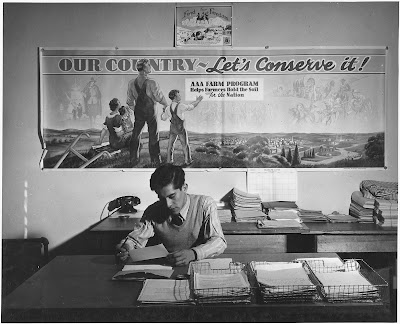 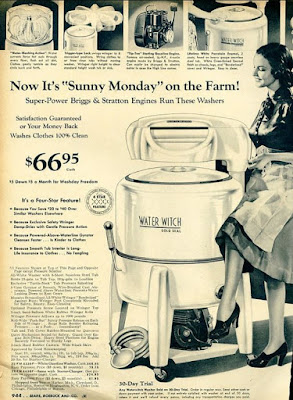 "...Sears washing machine that had a built in gasoline motor and a foot pedal to start it up with." 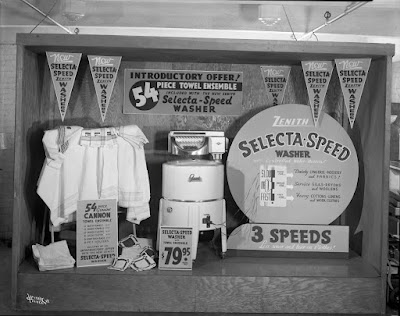